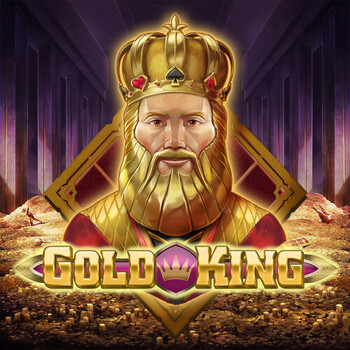 Produced by
Play N Go
Gold King is a 5-reel video slot game with 20 fixed paylines, and 1 fixed coin per line. Its most distinctive features are SUPER SPINS and SUPER STACKS. The game includes a wild symbol (Rose), and a free spin scatter symbol (Gold King). The wild symbol substitutes for any other reel symbol (except the scatter) to help comprise winning combinations. Super Stack: in each round during the main game, one random normal symbol is selected which will fill 12 consecutive spaces on each reel.

Super Spins: Three Gold King scatter symbols appearing on reels 1, 3, and 5 will trigger the Super Spins feature. 10 initial free spins will be awarded, but 2, 4, or 10 additional free spins can be won during the feature by getting 1, 2, or 3 Scatters on the reels respectively. There is no limit to the number of additional Super Spins that can be awarded. During each Super Spins round, one random A-K-Q-J-10 symbol is super stacked, filling 8 consecutive spaces on each reel. The wilds also appear stacked on the reels by taking up 6 or 7 consecutive spaces.

During Super Spins, the high paying Crown, Amulet and Gold Bar symbols expand to fill the entire reel. These symbols will only expand if doing so will create a winning combination. Before the symbols expand, any wins involving A-K-Q-J-10 symbols are paid out, as well as any wins involving only Wild symbols. On any spin during the main game, a Golden Spin can occur. On a Golden Spin, reels 1, 3, and 5 will be filled with a randomly Super Stack symbol for that spin.