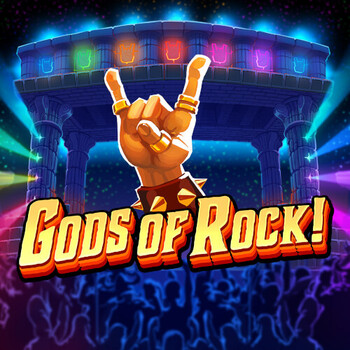 Produced by
Thunderkick
Thunderkick's Gods of Rock slot has 6 reels, 4 rows, and 466 ways to win. The game has a rock music theme and includes reel multipliers, wild encores, cascading symbols, free spins, and wild symbols. Gods of Rock online slot can be played for stakes ranging from 0.10 to 100 per spin. The RTP for the high variance game Gods of Rock is 96.05 percent. The maximum possible win for the Gods of Rock slot game is 20,000 times your stake.

About Gods of Rock

Gods of Rock is a slot machine with two very distinct themes: mythology-themed slots and music-themed slots. Being able to fully immerse yourself in the game is made possible by the amazing graphics. We can see the starry sky above the reels as well as a concert arena with a large audience in the backdrop. Speaking of the reels, each one has dials underneath it, and they are also very well made.

The letters J, Q, K, and A are among the symbols that have lower payouts, along with the numbers 9 and 10. Images of mythological creatures and deities are the higher paying symbols. Medusa, Anubis, Athena, Thor, and the highest paying symbol, Lucifer, pay 5x your stake for landing 5 on a payline in ascending order. The Gods of Rock game contains two wilds. Both can be used to complete a win by substituting any pay symbol and displaying what Thunderkick refers to as 'The Horns' hand gesture. The other wild is a Charged Wild with special abilities, as you will see. One wild is completely regular and only substitutes pay symbols.

The Bonus metre fills one level for each symbol that explodes. Wild Encore is activated when you collect 30 exploded symbols. The Bonus game receives 8 free spins when the maximum level of 55 exploded symbols is reached.

The Bonus metre in the Bonus game won't reset until it is filled. 3 extra free spins are given when the metre is full. The Bonus game retains the multiplier from the Base game. When 1-3 Charged Wild symbols appear on the reels at random, Wild Encore is triggered.

What is the maximum bet for Gods of Rock?

The maximum bet for Gods of Rock is 100.

What is the minimum bet for Gods of Rock?

Can I play Gods of Rock on mobile?

Yes, you can play Gods of Rock on any Android or iOS device.

What is the RTP of Gods of Rock?

What is the biggest potential win for Gods of Rock?

The biggest potential win for Gods of Rock is 20,000x your stake.

Gods of Rock at Genting Casino

At Genting Casino, you can play the Gods of Rock slot online. When you visit the website, there are many different slot machines, table games, and live casino games to choose from. Playing at Genting Casino online allows you to stay cosy in your own home. A fantastic collection of action-packed features, a stunning design, and powerful band members can be found in Gods of Rock slot machine. New and experienced players will both enjoy this slot.