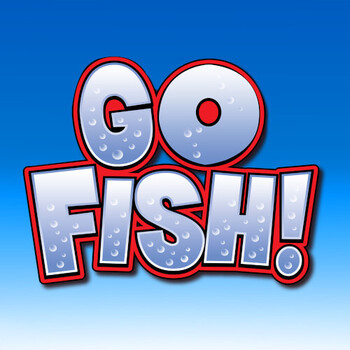 Eyes on the clear waters, set up your bait and let's Go Fish! Set your fishing gear up on this fishing inspired game. The Go Fish! reel is quite unique, as there are three standard reels at the center that are wrapped around by another reel to the left, above and right side forming a 20 symbol view which you can create a Cascade of winning combinations. There are 1024 ways to win in this exciting Go Fish!

Symbols range from A, K, Q, J, a Green Fish and a Seahorse which awards you 2.5 times your stake. A Blue, Yellow, Orange and Pink fish awards for 3 times or 3.75 times for land five-of-a-kind. If you land five-of-a-kind with a Blue Shark Symbol will net you a whopping 7.5 times your stake. The Puffer Fish is the Wild Symbol of the game that only shows up on the central reels, which can substitute for any symbol in the game except for Go Fish! Symbol which is the Scatter Symbol of the game. Land three of the Go Fish! Symbol on any reel and you would earn yourself Free Spins. While on the Free Spin the Water Wheel Symbol will replace the Go Fish! Symbol, landing 3 of these anywhere in view will transition the game to the Water Wheel which you could spin to grant you all kinds of multipliers. A Whale may appear at any time during the game swimming from behind the reels towards the front flipping its tail creating a Whirlpool which completely creates a new reel combination.

With an enticing RTP of 95.01% and a minimum bet of 0.20  to a maximum of 20, Fishing themed slots are extremely popular to players. Cast your line here on Go Fish! Available on Genting Casino and could be played on all mobile devices.