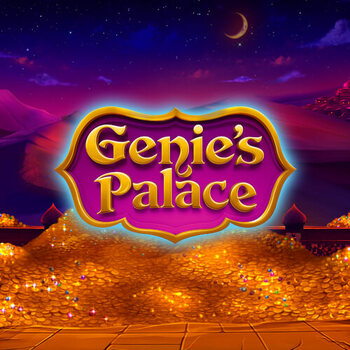 Genie’s Palace is played on a five by five symbol grid that offers players 25 paylines. Players can start playing the game with their bets ranging from 0.25 up to about 75. Players would need at least three similar symbols across a line from the left side to trigger a win. The game is rated to have a high volatility rating. The return to player average percentage of the game is at 96%.

The game offers players a bunch of mystical symbols that are well suited to its theme to represent the game play. The different colored gems represent the low paylines of the game with the orange, blue, purple and green gems. Some of the more higher paying symbols are represented by the treasure chest, a turban, and a magic carpet. One of the most coveted symbols in the game is represented by the multicolored crystals whereas players can win up to 500x when they land 5 symbols on a payline. The Multicolor crystal also represents the wild symbol of the game. As a Wild, this symbol can also replace other symbols to produce and trigger a winning combination.Players will be able to experience riding the Wild train, with its trail of blue smoke covering three rows , the magic lamp triggers a wild train feature when landing at the same time as the wild. The train will continue to collect wild and where there is none left to collect the reels respin once more for free, with the whole train remaining locked in place.

Genie’s Palace offers players a myriad of features and fun modes that are sure to cater to their fantasies and hopes of wealth. Players are taken into a world of pure wonder and an adventure themed atmosphere that is enhanced further with a fitting Arabic tune. Players should remember to bet responsibly and to play to their comfort.