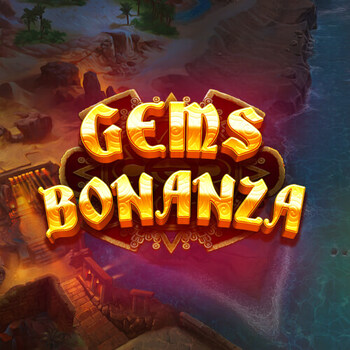 Produced by
Pragmatic
Are you a fan of searching for long-lost treasures using a map? Then the Gems Bonanza slot should be right up your alley. Search for treasures on a map on the 8×8 video slot. The path to treasures is full of colored markings that leads you to a spin featu

Welcome to the Aztec Temple at Gems Bonanza

Gems Bonanza is an interesting slot game played on an 8×8 grid. The attractive, highly volatile slot comes with a spin feature, numerous symbols and lucky wilds. Play Gems Bonanza and try to trigger the gold fever feature to activate all the spin modifiers. Play to the last level and stand a chance to get the highly rewarding 10x multiplier.

The Gems Bonanza slot online features Aztec gods that bring to life the game with a splash of gems. The gems reward players with big wins. Players get ushered into a magical place with gold ingots, attractive winning combinations and glittering gems. Furthermore, players stand a chance of wining a generous reward of up to 10,000x your initial wager per round.

Set up the fire that melts all the rewarding quantities of gold available when you play Gems Bonanza slot. Afterwards, prepare to try your luck at winning the attractive payouts available. In addition, this highly volatile slot game comes with 20 paylines. Walk around the Aztec temple and stumble into the rewarding prizes available. Also, check out the colored gems for more rewards.

The gameplay for Gems Bonanza is a bit unique. It comes with a tumble feature where gems disappear on the screen. In addition, it comes with special cells that feature a unique mark. The mark can trigger one of the five spin features available. Moreover, it features the Gold Fever feature, which plays out modifiers in turns during the different rounds.

There are five spin features in the slot game. The first is the nuclear feature. It comes triggered with the blue marking. It removes all the symbols on the grid and replaces them with a new set of symbols. The second is the wild gem feature that triggers with the pink marking. After completing a round, it turns one symbol into wilds.

The squares feature gets triggered with the brown marking. It features a 2×2 symbol block that adds to a random position on the reels. It also forms a new payout. The fourth is the colossal feature triggered with the red mark. It adds either a 3×3, 4×4 or 5×5 block. The last feature is the lucky wilds triggered with a green mark.

The Gems Bonanza is an action-packed slot game. Furthermore, it comes with an attractive treasure of 10,000x your initial stake. Moreover, it features a simple gameplay that involves collecting gems for rewards and prizes. Additionally, you can activate the gold fever progressive feature for more points. Join the search in the Aztec temple and stand a chance to win real money prizes.