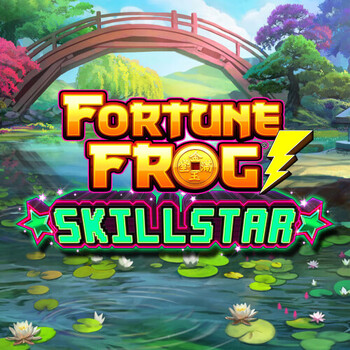 The Asian themes in the slot games possess zen and also gives the feeling of prosperity even with the simplest forms. Fortune Frog Skillstar is a reskin game by Lightning Box which updates new mechanics into the game yet keeping its classic design that is familiar to legacy players. The design features an Eastern landscape featuring a Chinese bridge, a calm pond, with plants and trees  that are also found in common Asian aesthetics.

Plotted on a game grid of 5 reels and 4 rows, it accepts steaks starting at 0.4 to 50 per spin. RTP is slightly above the average level at 96.07% and max reward multiplier reach up to 4,672x the bet amount.

There are 8regular symbols in the game which are classified as low and high value symbols. The low symbols are the A-10 Royal symbols (A, 10, J, Q, K), and the high symbols consist of Koi fish, Prosperity Tree, and a long-haired man. Coin symbols are bonus symbols that display a fixed cash value, though they also act as normal symbols during the base game.

There are two wild symbols, these are the Lady Wild and Frog Wild. The Lady wild is the substitution symbol  and can help to pay up to 125x stake of line wins. On the other hand, the Frog Wild doesn’t have value rather triggers special features of the game.

There are several effects when the Frog Wild lands on reels alongside a bonus symbol. The value is collected and added to a counter that will reward multipliers or free spins. There is also an option to buy the bonus at the cost of 50x of your stake. A mini game is offered before the bonus begins which is more recreational to take a break from the consecutive play. You have the option to skip this mini game and go straight to the bonus game.

Fortune Frog Skillstar generally speaking is a classic game with a few upgrades and features. Game mechanics remain simple as well with the design. The zen element is present even with the gameplay which many would like to experience despite the fast-paced and thrilling energy of online slots.