Whether you love the beautiful game or you’re just looking for a slot with fantastic bonus features and solid prizes, give Football: Champions Cup a try. You can win up to 1,000x your bet, play a penalty shootout in the Bonus Game, and take part in an amazing Free Spins Tournament! 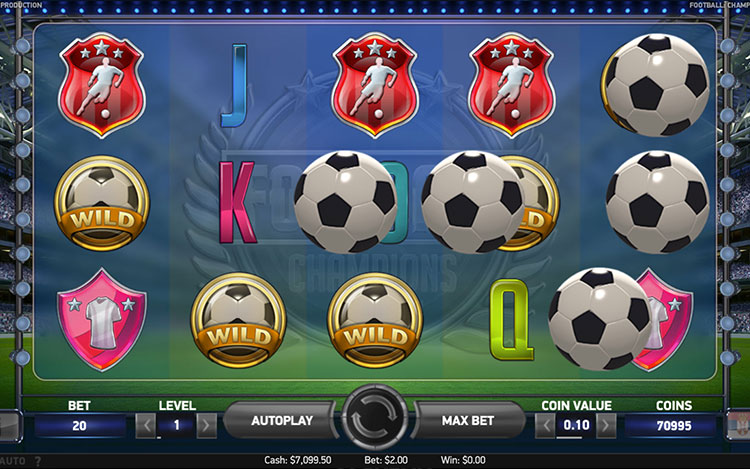 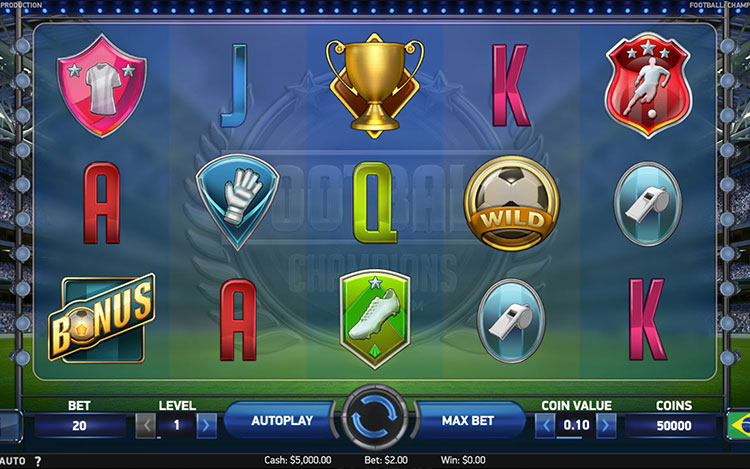 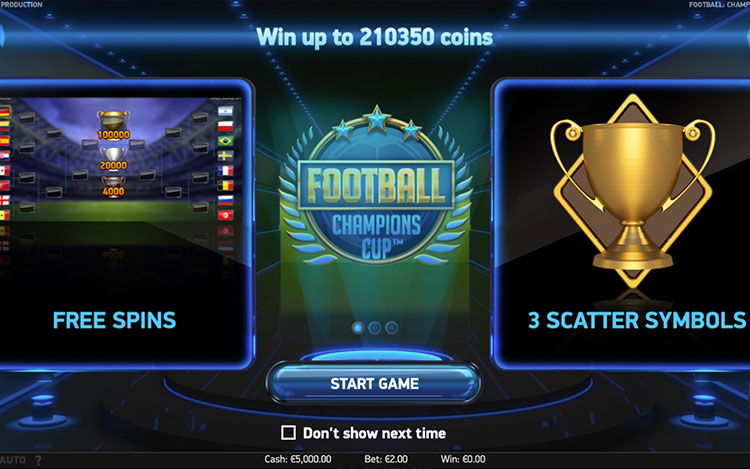 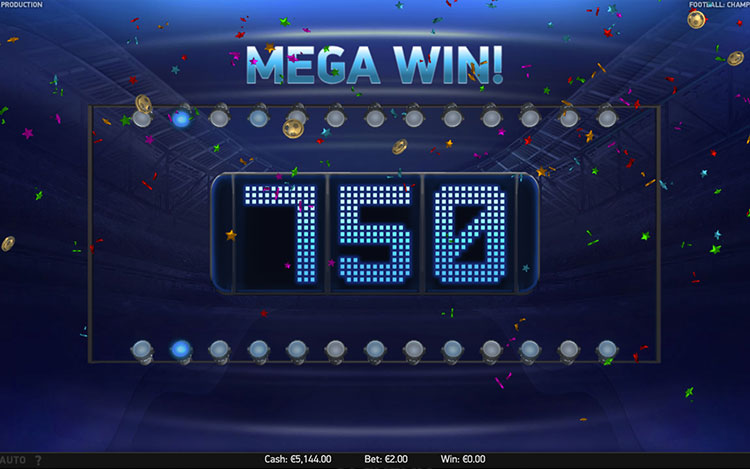 The Football: Champions Cup game looks remarkable and captures the atmosphere of a major match with its amazing sound effects — crowds cheer, sing, and whistle throughout. Its symbols award the following prizes for 5 on a payline:

There are 2 Scoring Wilds: Blue Wilds land on reels 1 and 2, while Red Wilds appear on reels 4 and 5 only. They award a goal for either team depending on where they land.

The Football: Champions Cup online slot includes a pick-and-click bonus game that puts you right on the pitch for a penalty shootout. Initially, you’ll play through 5 rounds with 2 parts each.

The first part involves choosing from 4 positions on the goal to try to score. The second requires that you play as the goalkeeper, only now you’ll pick 4 positions to try to stop the ball from hitting the back of the net.

Score a goal during the first part of the game to win 1 point for your team and a prize. Miss, and you’ll get nothing.

During the second part, each goal scored will increase your win multiplier by 1. However, the opposing team’s score will increase by 1 for each ball you fail to catch.

Three Scatter symbols appearing anywhere on reels 2, 3, or 4 will trigger the Free Spins feature. This will be played at the same stake as the triggering spin.

The Free Spins Tournament is based on the Championship’s knockout stage, and each Free Spins round represents a different match. You’ll advance to another round and another game if you win — retriggering the free spins feature!

Your aim is to win the Free Spins Tournament and claim a prize for coming in 1st, 2nd, or 3rd: 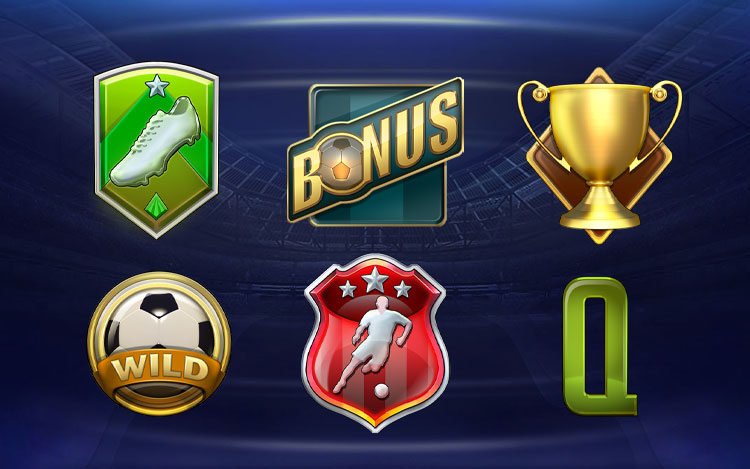 The Football: Champions Cup slot game invites you to pick from several international teams before you start playing — just scroll through the flags and click on your favourite. Your choice of team won’t have any impact on your potential winnings or how the game plays.

You’ll be taken to the reels after you choose, but if you want to switch to another team later, tap the flag in the bottom-right corner to open the team selection screen again.

Press the SPIN button in the middle of the control panel beneath the reels to start playing. The 5x3 reels will spin, stop, and reveal 15 random symbols — match 3 or more identical symbols on the 20 paylines to create a winning combination! Any paylines involved in the win will be marked with a clear line.

To change your bet, use the buttons on either side of the LEVEL and COIN VALUE indicators — you can set a stake of between £0.20 and £100. Want to play at the biggest bet available? The MAX BET button makes it quicker and easier than clicking through the smaller stakes.

Your current stake is always displayed in the BET indicator, and your remaining balance is shown in the COINS section of the control panel. You can increase or decrease your bet at any time between spins during the base game.

What is the maximum bet for Football: Champions Cup?

You can place a maximum bet of £100 on Football: Champions Cup.

What is the minimum bet for Football: Champions Cup?

Can I play Football: Champions Cup on mobile?

Football: Champions Cup can be played on a mobile device.

What is the RTP of Football: Champions Cup?

What is the biggest potential win for Football: Champions Cup?

The biggest potential win up for grabs in NetEnt’s Football: Champions Cup slot machine is 1,000x your bet.

NetEnt (NetEntertainment) began operations in Sweden in 1996 and has grown steadily since then, breaking into the lucrative US market in 2015. NetEnt had two online casinos in its early days, which it ran until they were sold in 2006. Swirly Spins, Cluster Pays, and Infinireels are just a few of Netnet's industry-leading mechanisms that have revolutionised the way many modern slot games are played. NetEnt offers approximately 200 games in its catalogue, and their systems processed 58.3 billion gaming transactions in 2019. Over the years, NetEnt has produced a slew of successful games, including The Legend of Shangri-La:Cluster Pays, Devils Delights, and Koi Princess.

Football: Champions Cup offers fantastic bonuses and high-paying wins with an authentic atmosphere that makes you feel like you’re at a real match!

Want to try it for yourself? Sign up at Genting Casino to play NetEnt’s incredible footballing slot today, as well as an incredible range of other slots, table games, and live casino games.