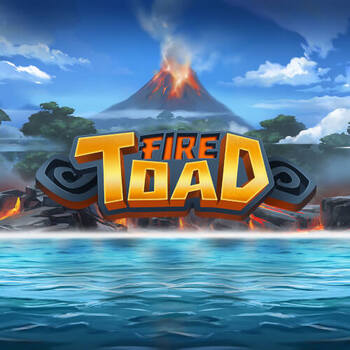 Players should get their light clothes ready because it's going to get hot! Fire Toad slot, set against a volcanic island, derives its name from the fire toads living on the island. The slot features a unique wild symbol that also serves as the slot's scatter symbol, and there are two bonus features capable of influencing the player's payout, but only if they get lucky. To play Fire Toad video slot only requires players to have either a tablet, mobile phone or desktop thanks to the fact that it's supported on devices with Android, Windows or iOS operating systems. It's worth noting that even when players change devices, their progress gets saved, and they don't even have to download this interesting game as it's readily available at Genting Casino Casino.

To play Fire Toad slot, players have an option of either a minimum bet limit of 0.10 Coins or a maximum bet limit of 100 Coins per spin. The maximum win of the game is 5,000x a player's stake but, with medium to high variance, going for the top prize might be tricky, although the slot's impressive RTP of 96.2% is quite encouraging.

Fire Toad slot includes the symbol upgrade feature whereby the player needs to land 2 scatter symbols on the reels, which upgrades a fire toad symbol from stage 1 to 4 — and the bigger the size of the symbol, the bigger the payout. The symbol upgrades from a Fire Tadpole to the Fire Toad King symbol, which is the highest-paying symbol, rewarding players with 1.2x their stake.

The firefly symbol is Fire Toad's slot scatter symbol, and it also serves as the wild symbol. It can reward the player with either 0.1x, 0.5x, 1x or 5x when they land 2, 3, 4 or 5 of them on the reels, respectively. In short, players should watch out for the scatter symbol because it's the key to unlocking the bonus features.

It's clear Play'n GO have put a lot of effort into the making of Fire Toad, and the fact that it's playable across a range of devices and browsers shows it's not a complicated game at all. The slot's RTP says it's a friendly game, although players ought to be careful as this is a highly volatile slot — but it's worth the challenge!