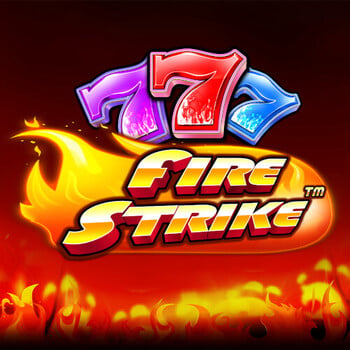 Although Fire Strike is similar to the standard fruit-themed slot machine, it differs from many other slots in a few ways. The game happens in a 5x3 reel setup with 10 paylines. It has Return to Player rates of 94.50%, 95.50%, and 96.50%.

Player’s bets range from 0.10 to 50 per spin. There are no bonus spins to find in this game. Instead, getting as many Firestrike symbols to appear on the reels is the goal. There could be up to 12 different standard symbols spinning on the reels. Dice, Playing Cards, Casino Tokens, Bankrolls, Single, Double, and Triple Bars, Triple Fortunate Sevens, and Green Diamonds are some of them. Blue, Purple, and Red Lucky Sevens are the three highest paying symbols; five of a kind will award you 30x, 50x, or 100x your wager, accordingly. The wild is, of course, represented by the Firestrike emblem with the word "wild" written over it. It may be used in place of all other symbols, shows up stacked on all reels, and pays out 200x your wager for 5 on a payline. There aren't many features to mention, despite the fact that they were inspired by classic fruit machines. Here, it's all about triggering the Firestrike Bonus, which entails spinning in as many Firestrike symbols as you can. No payline is necessary for them to appear in sequence if you land six or more of them anywhere on the reels. There is an instant reward for 6 or more of a kind up to 14 which can be 1x, 2x, 8x, 25x, 50x, 150x, 500x, 1000x, and 2500x, respectively. Lookout for 15 of a kind which triggers the Grand Jackpot with a potential win of 25,000x your stake.

Register to Fire Strike on Genting Casino, playable on all mobile devices. As fun as Fire Strike may seem to play, always be mindful of your bets and only go with what you're comfortable with.