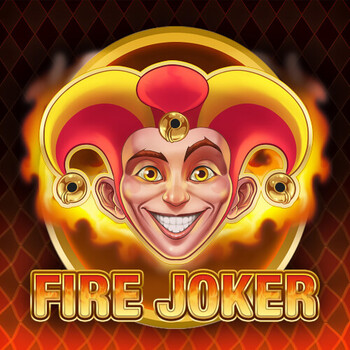 Produced by
Play N Go
When it comes to online slots, players are spoilt for choice in terms of the sheer number of games available. However, many slot lovers still feel drawn to classically designed games that tap into the magic of land-based casinos. Fire Joker combines this old-school slot machine feel with fresh and exciting features for a thrilling experience. Designed by software powerhouse Play'n Go, Fire Joker online is a 3-reel video slot with 5 fixed paylines. The premise is a throwback to classic slot games, with crisp graphics and animations as well as modern game dynamics.

Players can land a winning payline by combining three matching symbols from left to right, and things get very heated when the mischievous Fire Joker wild symbol appears on any of the three reels. The Wild symbol can substitute for any of the existing symbols in the reel in order to increase the chances of creating a winning combination.

As can be expected, Fire Joker online is packed retro slot symbols that have been redesigned in a spectacular way. Key symbols include the red number 7, the Stars, the Golden 'BAR' symbol, and juicy fruits such as plums, grapes, lemons and cherries.

The Wild Fire Joker symbol is the one to look out for, as landing three of these will give players a win worth a whopping 80 times their original stake. The next important symbol when you play Fire Joker online will be the number 7 which gives a multiplier of 25 times, followed by the stars at 20 times the original stake, and the Golden 'BAR' symbol at a multiplier of 20x. The fruits give a multiplier ranging from 4x to 7x, while the Blue Cross symbol gives the lowest multiplier at 2x.

And if these high paying combinations were not enough, players can also land some serious winning paylines when they trigger the Respin of Fire feature in Fire Joker online. When stacked symbols land on any two reels and form no winning paylines, a free spin is rewarded on the third reel. The stacked symbols remain frozen in place, so players will have a second shot at landing a juicy winning payline.

Game features are not the only factor that makes Fire Joker online an engaging and exciting game. The minds at Play'n Go have managed to create a colourful world that is full of futuristic sound animations and upbeat music. Reels come alive in a literal blaze each time a winning payline is landed, with the music increasing in tempo and creating even more excitement as the big wins pile on.

This fiery game is more than just an adaption of a classic slot machine theme. Fire Joker is a well-rounded and energised game that offers an exhilarating gaming experience with the chance of multiplying winnings up to 10 times. The real question is how willing players are to play with fire and win themselves some sizzling prizes.