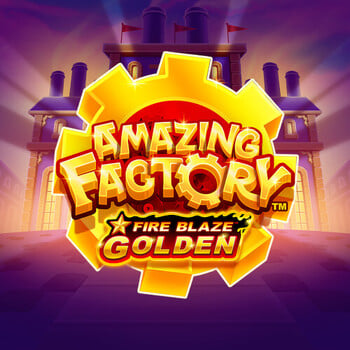 Fire Blaze Golden Amazing Factory is a classic slot set in a factory of gold. The gameplay happens on a 5x3 reel setup with 40 paylines. It has a medium variance and Return to Player rate of 96.5%.

Player’s bet ranges between 20 and 500 per spin. A to J royals, as well as a Golden Key, Pocket Watch, and Top Hat, are included in the game. The Cart of Gold comes out on top because it awards 0.2x, 1x or 4x your total bet when you form 3, 4, or 5 of them. The jolly jap who manages the factory is the game’s wild. When he lands on reels 2, 3, 4 or 5, he replaces all symbols besides the scatter. Moreover, landing six or more Bell symbols anywhere on the reels during a single spin activates the Fire Blaze Golden Respin feature. The Bells change into Coins, each of which is worth money. After that, you'll get three respins on a different set of reels that only contain Coins and empty spaces. The number of respins is reset to 3 if you receive a new Coin and every time a Coin lands, there is a reward. Keep an eye out for Coins with the designations Mini, Minor, or Major because it lets you win a jackpot award when you fill the whole grid with coins. Moreover, by landing 3, 4, or 5 scatters anywhere on the reels during the same spin, the Free Games feature is activated. You'll play 6 free spins after receiving an award of 2x, 10x, or 50x your total wager. The Bell symbol serves as a second wild during the free spins and takes the place of all other regular symbols. The Fire Blaze Golden Respin bonus can also be triggered from the free spins round.

Fire Blaze Golden Amazing Factory is playable on all mobile devices and free to try on Genting Casino. Remember not to spend everything in one go, a little restraint on your budget would not hurt.