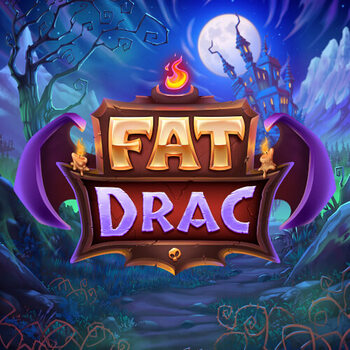 Produced by
Push Gaming
The Fat Drac slot machine is one of the most entertaining games out there today. Step into the eerie world of vampires as you venture into the castle of Fat Drac! How will you fare when you come face to face with Count Dracula himself? Surrounded by all the creatures and horrors of his ancient castle, will you emerge with big rewards or stumble into the darkness? Play Fat Drac slot and find out!

Everything about the game is fun and dynamic. From the reels and symbols to the landscapes in the background. They are all drabbed in the lore and visuals of the Far Drac’s domain. Fight off hordes of bats, uncover goblets, and journey deep into the night in a fun and comic slot adventure.

Push Gaming releases yet another installment in their ‘Fat’ series. This time, they turn the tables on the classic tale of the vicious Count Dracula. But this is not the vampire you are familiar with, Fat Drac is on a whole other level of fun! The treatment is light and humorous. Promising an entertaining experience with the possibility of getting big rewards.

The Fat Drac slot game is played on 5 reels and 5 rows with 20 lines. The game is ranked at a high volatility at 96.57% RTP. With a possible multiplier of a max win of up to x50,000 your initial bet, the Fat Drac game is definitely something you can bite into.

The game comes in with many features that complement the overall theme. Basic symbols appear in the form of the four card suits, heart, spades, diamonds, and clubs. While the more premium symbols such as the goblet, skeleton, and Fat Drac himself are the ones to watch out for. The Fat Drac symbol is a Reveal symbol. When he lands, he can transform into a bat symbol or any paying symbol. He’s a sure target if you want those big rewards. Combine that wit the Fat Bat, Coffin Symbols, and the Free Spin features for a mouthful of possibilities to get those prizes.

Another fun feature is the Bat Symbol paired with the 7 bubbles you see beside the reels. When a bat symbol lands, it will swing over to the bubbles to pop them for instant cash prizes. How big of a prize you ask? It can be anywhere from a measly x1 of your initial bet, to a jaw-dropping x50,000! Fat Drac slot online sure can be generous.

Play Fat Drac at Genting Casino and grab the chance to sink your teeth into those big rewards. Genting Casino offers only the best and most entertaining slots and games for your gaming pleasure. Play at home via desktop or on-th-go using your phones or tablets. Take a chance and win only at genting Casino.