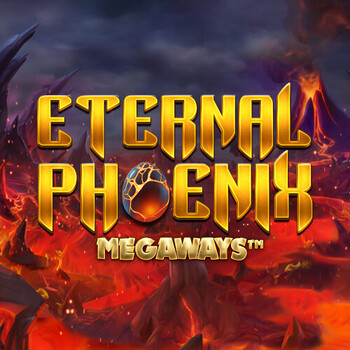 Eternal Phoenix Megaways is played on a layout using 6 main reels holding 2 to 7 symbols each, plus a 4-symbol upper reel. This setup produces 324 to 117,649 possible ways to win when the maximum number of symbols lands on the reels. The Power Play function is an optional bet feature that increases the stake for enhanced conditions. Each sets the number of minimum Megaways on the reels from 5,000 to 20,000, for an increase in stake of 1.5x to 5x the base bet. Select a bet of 0.10 to 10 per spin and activate one of four power play options.

At least three matching symbols landing left to right in adjacent reels from the leftmost side forms a win.  9-As and three glowing stones are the lows worth from 2 to 5x the stake. The phoenix holds the highest value, awarding 50x the bet for six matching symbols. Match two symbols for a win. The wild appears only on the top positions reels 2-5, substituting for all symbols except scatters. Mystery symbols land in any position and transform into the same random symbol, except as wilds or scatters. Scatters can land in any position except the upper four cells. Landing three awards eight free spins, while an additional scatter adds 5 extra spins. Players can gamble the free spins they’ve won for a chance to win up to 30. If you lose the gamble, you will lose all the free spins you've won. During the bonus round, an unlimited win multiplier takes effect. Starting at x1, the multiplier increases by one after every cascade with no set upper limit. Extra free spins can be won, too, as the scatter now appears on the 4-position top reel. Landing 3 or 4 scatters awards +5 or +10 free spins. When the Power Play is in use, whatever the minimum Megaways level carries over to free spins as well.