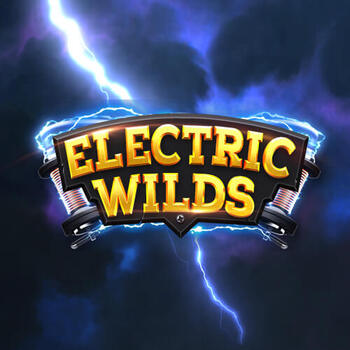 Transmit high voltage power capsules into the power lines to get electrifying rewards. Electric Wilds is a 3x3 reel with 5 paylines. You can start placing your bets from a minimum of 0.10 up to a maximum 30 per spin. It has a decent Return to Player Rate of 96.17%. To land winners. Only three of a kinds are possible of course, starting with low pay J-A royals which look like Andy Warhol can art. The Futuristically styled high pays, meanwhile, consist of three coloured power capsules and a glowing-eyed robot head. The cyborg is worth the most from the bunch at 20x the stake.

Every line of 3 bolts, vertically, horizontally, or diagonally, on the Matrix causes one symbol type on the grid to turn wild. Multiple lines mean multiple symbols turn wild. Lights on the Matrix generally clear on the next spin, but there is a chance some lights stay lit for the next spin. There is also a chance super lightning symbols appear on a spin.

Should players manage to fill the grid with the same symbol, via wilds or just one symbol type, they trigger the Repeater bonus. The screen shifts to one covered in flashing lightning and 5 tubes - 1 broken, 4 operational. Hitting the start button causes electricity to move along the tubes before stopping at one.

Finally, a free spins game has been included which is more or less identical to the base game.

Electric Wilds is available to play on the browser at Genting Casino. Make sure you only spend what you’re comfortable with and take a rest from time to time.