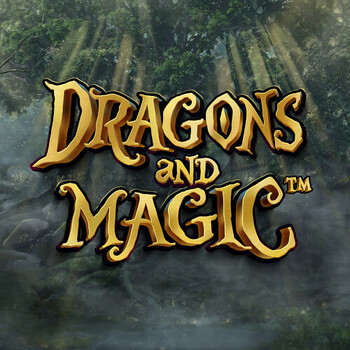 Dragons and Magic is a fantasy-themed slot that features mythical creatures and magic. The game has a 5x3 reel setup. It has a medium volatility and Return to Player rate of 96.01%. The minimum bet is 0.20 up to a maximum of 200.

The low-paying symbols are Red, Yellow, Green, and Blue Potion bottles. For the higher payouts, we have a Glowing-eyed Dragon, a Magician, a Rabbit Foot, and a Jeweled Ring. The Dragon is a little unique in that it only requires two-of-a-kind to win. There are two types of Dragon Eye wilds: ordinary and multiplier. Both can appear anywhere on the reels to replace other pay symbols, but only the multiplier wild increases payouts by x2, x5, or x10. When a wild has a multiplier or not, it shows up as a dragon's eye that blinks. Moreover, the Dragon Fireball feature, which fires a number of fireballs at different spots on the reels to transform the symbols in those areas into matching ones. The Golden Fiery Dragon egg is the scatter and if you see 3, 4 or 5 of them, you’ll receive 10, 20, or 50 free spins. On reels 2, 3, or 4 during the bonus round, a new symbol appears in the form of colored Dragon eggs. The height of each reel increases by one, up to a maximum of six, while just one of these dragon eggs is visible. If 2 or 3 are visible, they expand the reels and, in addition, turn all of the symbols on one or both of the reels into wilds. During the bonus spins, scatters are still present. Every time one appears, the reel goes up by one, up to a maximum of six. There is a Gamble feature which is the standard blind card trick that doubles or quadruples your winnings for guessing the right color or suit.

Dragons and Magic is playable on all mobile devices and free to try on Genting Casino. Remember not to spend everything in one go, a little restraint on your budget would not hurt.