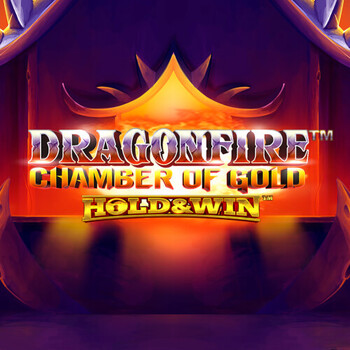 About Dragonfire: Chamber of Gold Hold and Win

The dragon's fantastic and fantastical realm serves as the game Dragonfire's main subject: Chamber of Gold Hold and Win slot game. As the reels spin, you'll see one of these flies on the screen. The dragon throne is then reached by a flight of stairs that can be seen in the backdrop. There is always the possibility that you can defeat the dragonfire and take the gold there for yourself despite the fact that this obviously represents the eponymous chamber of gold. To further enhance the game's realism, a beautiful soundtrack is also provided.

On a 5-reel, 5-row gaming panel with 50 paylines, the action takes place in order to land winning combos of three to five of a kind across. It accomplishes this in a highly volatile manner by dividing the action between a base game covered in wilds and a bonus round with dragon eggs as money symbols. Players choose wagers between 0.25 and 25 per spin when getting ready for the adventure, and dungeon questing is now feasible on any device.

Even some of the lower paying inclusions among the symbols that appear on the slot's five reels have really attractive designs. From the lowest value of 10 up to J, Q, K, and A, these are active in the form of playing card symbols. The insignia of the many fantasy figures may now be seen in action. They are on the hunt for the gold and the dragon in order to defeat them both. These include the sorceress with horns, the elven archer, the spellcaster, the warrior with a sword, and the ninja assassin. The final of these has a maximum payout of 80 times your initial bet.

Additionally, a wild symbol that can occur on the reels can be used to replace any other standard symbol in the Dragonfire: Chamber of Gold Hold and Win slot online. Other variations of this are also in play, such as the multiplier wild.

The scatter of dragon eggs is another significant symbol in Dragonfire Chamber of Gold. The Hold&Win bonus round is activated in the base game when at least 5 of these symbols are landed. The standard scatter symbols that trigger the bonus round lock in place, and three spins are given. On the game panel where the bonus is played, the regular symbols have been deleted. New dragon eggs now lock in place once they land during the bonus round, reveal a monetary award, and reset the spin counter to three. One of the gates next to the grid opens if three dragon eggs land in a row. Dragon eggs are taken off the reels when the gate on the right opens, collecting all values shown in dragon eggs.

Three multiplier frames are added to the grid if the left gate opens. An egg's value is multiplied if it lands in one of the multiplier frames or if a frame lands on it. Multiplier frames change to random positions between spins. A frame is taken off the reels after being used to increase a victory. Each spin that a frame is still on the reels increases its multiplier by one until it is used to raise the value of a scatter symbol.

Dragonfire: Chamber of Gold Hold and Win at Genting Casino

There is a chance that the creator of The Dragonfire: Chamber of Gold Hold and Win slot machine by iSoftBet will add even more features while the game is still being developed. None of which the game requires. In terms of both its central idea and the unique modifiers added to it, it is already very fascinating. For amazing cash prizes, play Dragonfire: Chamber of Gold Hold and Win.