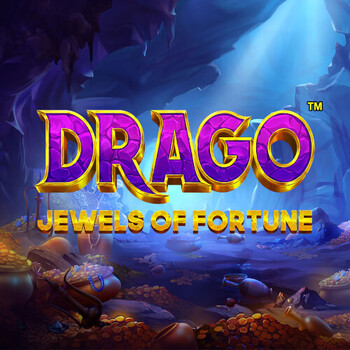 Enter the realm of mighty fire-breathing dragons in Drago - Jewels of Fortune. Developed by Pragmatic Play, this is a fantasy slot that offers a couple of interesting features alongside its impressive potential. Dragons are the main attraction. Animated in a very cartoonish way like Spyro the Dragon. Drago - Jewels of Fortune manages to keep curiosity rolling due to its unusual reel formation and gameplay that coincides with uncommonly large prizes. If the players overcome the trials of the dragons. Volatility is served in Pragmatic Play's volatility meter that lets players know exactly what they are getting in before playing. A universally appealing RTP of 96.5% sits comfortably above the average.

The reels are set right in a dragon's lair. A 3D animated purple dragon overlooks as players spin the reels. The cavern is filled with treasures and golden coins glimmering in the background. A powerful fantasy soundtrack caps the overall audio and visuals. The reels are also positioned in an unusual 5-4-4-4-5 setup. Two ends of the grid possess an extra row with a golden frame around each corner. Winning combinations are formed from three or matching symbols. Winning symbols land in any row and provides 1,600 ways to win.

The four corner positions of the grid are the keys to gold in Drago - Jewels of Fortune. Depending on the symbols landed, players can access Dragon Super Spins or free spins. Four matching dragon symbols trigger the Dragon Super Spin. Triggering symbols remain in place until there are no more Dragon symbols to hit. The collected symbols result in a prize. The white crystal icon is the bonus symbol. Hitting four of these in all corners triggers the free spins. Before the round, a respin game gives three respins that resets every time symbols land. Spin and play.