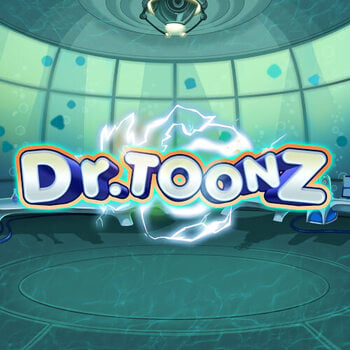 Dr. Toonz believes that life forms can be created in new ways in this 6-reel, 30-row game grid set in a series of test tubes. In these tubes, symbols form combinations using a dynamic payways system, producing between 4,096 to 262,144 ways to win.

Winning combinations hit when three to six matching symbols land left to right from reel one. This equates to 4,096 ways to win from the start, which quickly builds when the payways start firing. Four one-eyed aliens are low pays, and four two-eyed aliens are high. Six premium symbol combinations are worth 0.5 to 1x the stake. The Wild, landing on any reel to replace any of the symbols for a line of six is worth 2x the bet.

Quantumeter starts at 0-2 charges. Each winning cascade charges the meter by 1, and 3 charges award one charge per spin, or a free spin. Quantum wilds adds two to six wilds in random positions; Metamorphosis transforms five to eight pay symbols; and Disintegration removes all one-eyed alien symbols and adds 2 wilds to the reels.

Watch out for x2 payway symbols that randomly appear above the reel. This doubles the number of ways to win on that particular reel. Landing an x2 on each reel maxes out payways at 262,144.

Register to Dr. Toonz on Genting Casino, playable on all mobile devices. Know your gambling  limit. Play within it to keep gambling fun.