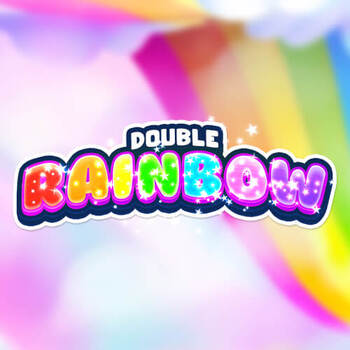 Produced by
Hacksaw
Double Rainbow Online Slot is a 7 column 6 row Cluster Pays slot machine from Hacksaw Gaming’s Pocketz Series. A food theme is used on Double Rainbow Slot Online it offers a maximum possible win of 5,000x your stake. This theme is highly popular as it resembles a popular mobile app game. Double Rainbow Slot Machine has multipliers and a unique bonus. Our Double Rainbow Slot Game review will tell us more about the game, its features and bonuses.

The Double Rainbow game uses a 7 column and 6 Rows Cluster Pays system. Regular bets range from 0.10 to 100, and the game is accessible via any device. The RTP for Double Rainbow is 96.38 percent which is above the industry average. It is a medium variance slot with a 5,000x maximum possible win.There is no need to search for the highest paying symbol in Double Rainbow because each sign has the same value. Wilds can be used to replace all symbols, both high and low paying.

Double Rainbow employs a cluster pays mechanism that activates the cascades feature when winning clusters appear. When at least five matching symbols land in horizontal or vertically adjacent slots, a winning cluster is formed. Seven candy-like symbols replace the traditional pay symbols, and they all have the same value. Hitting a five-symbol cluster is worth 0.1x the bet, while hitting a 15-symbol cluster is worth 50x the stake. The Double Rainbow slot is a mobile-optimised game, which you can reach through your mobile browsers on Windows, iOs and Android. No previous downloads are necessary and the game runs well on all of them.

The most important aspect of the game is, of course, the clusters. It eliminates the winning symbols and replaces them with new ones from above, which may result in successive wins.

When a Cloud symbol appears in one of the seven symbol colors, the reel multiplier is activated. If a multiplier already exists on a reel, the new value is added. These multipliers are utilized in cluster wins that have the same color as the multiplier.

When there are 7 active reels, this feature is also engaged, and all reel multipliers are multiplied by 2x, 3x, 4x, 5x, or 10x. If all five reels remain active, you will be awarded five free spins.