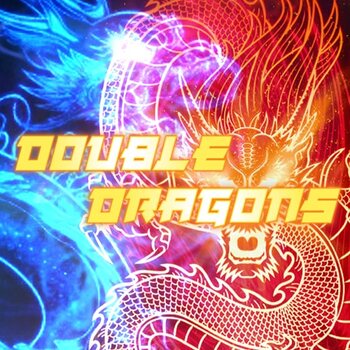 Produced by
Yggdrasil
Roaring good fun with big-win potential - there's plenty to love about Double Dragons. Your quest is to unleash the dragons with four drop-down wins and collect nine dragons' heads to reward you with free spins. There is also the chance to win 100,000 coins with one spin! Wins just drop into your claws with Double Dragons slots online, with its five searing reels and 25 paylines. The feature-packed game has eight regular symbols and a number of Wild symbols, represented by two types of dragons - a red one and a blue one.

Play Double Dragons slots online and you know you are getting huge win potential directly in the base game with tall stacks of Wilds and the Double Dragons feature. While hunting the big wins, you will collect dragon heads that will award a Free Spin mode when nine of them are gathered.

Each dragon consists of a Dragon head Wild and a number of Body Wilds. The Dragon head Wilds have special effects - the blue dragon head multiplies a dropdown by two, while the red dragon head rewards two or three additional regular Red Dragon Wilds. The Body Wilds are normal Wilds which can substitute all other symbols. The Wilds always appear in these constellations on the reels, ensuring you'll have a burning desire to bear down on those big wins.

The enchanting Double Dragons video slots game features dropdown symbols, meaning that winning symbols disappear from the game after the win is paid out, leaving room for new symbols dropping down. New symbols continue to drop down as long as new winning combinations are formed.

You'll be on a hot streak when you collect nine Red Dragon heads or nine Blue Dragon heads to activate the Free Spin mode, which is played out with the average coin value used when collecting the nine heads. You only need to win twice in a row to activate the Double Dragons feature in Free Spin.

Whether you are a novice or an accomplished assembler of dragons' heads, you can now play Double Dragons video slots on desktop, tablet or on mobile devices.

Brought to you by Genting, Double Dragons video slots allows you double up on your fun. So, bring your basilisk-beating best and try to spear a monstrous win.