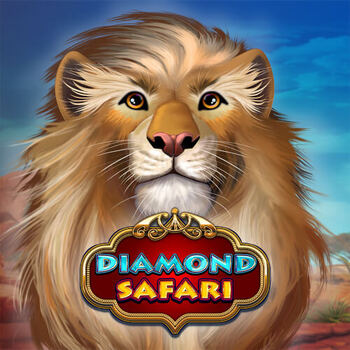 Produced by
Oryx
The online slot machine Diamond Safari game from Atomic Slot Lab will transport you to a safari. It contains a set of four preset jackpots for the Wild Respin feature, as well as bonus spins that are played on a larger playing area. Another warning flag that suggests something unusual might be happening in the savanna is the red rectangle that surrounds reels 3, 4, and 5. Diamond Safari by Atomic Slot Lab is now open for business. Only the gemstones on the third reel and those connected to the fourth reel are eligible for the game's symbol payouts. Play Diamond Safari to know more.

243 ways to win are available in the 5x3 reel slot game Diamond Safari online. There are set paylines that provide minimum and maximum wagers of 0.30 and 120. This slot machine's gaming icons include letters, gems, and numerous safari animals. Diamond Safari slot machine has bonus spins, a wild respin, and a bonus purchase function as extra features.

As a medium-volatility online slot, Diamond Safari online slot offers average returns and a medium level of risk. Players don't have to wait too long for winning combinations to appear, and winning payouts are also not excessive. However, it suits both high rollers who spend a lot and frugal savers equally well.

A video slot with a safari theme called Diamond Safari appears to have been coiled out of the jungle. This slot machine is a really vibrant game because it offers various tales about the creatures you'll see on a safari. Anyone playing this game will be struck by the stunning King of the Jungle, which is placed in the background's upper left corner, next to the reels.

The game's reels, which include various animals and sound effects, also have a safari-themed design.

12 different game symbols are available in Diamond Safari, including 1 Wild symbol, 1 Scatter symbol, 5 low-paying symbols, and 5 high-paying symbols. The placement and orientation of these game icons on the reel affect their payouts.

The 10-A icons have the lowest payouts. The tiger symbol, which pays from 0.60x to 5x the wager, comes after the monkey, zebra, and giraffe. The lion, which is higher up, pays more than 8 times the bet. The Scatter tree symbol offers the best payouts, up to 150 times your bet.

Players will also encounter Wild symbols in this game that feature a roaring lion.

The wager here is the same as it was in the game where the function was activated. Each free game will start as a 6x3 game with three high symbols shown. This feature makes use of many reels.

By securing a further 3-5 Scatters, you can also renew the bonus spins.

During the awarding reel spin, reels 3-6 may expand vertically to a maximum of four symbol spots if the Wild respin feature is activated during a free game.

Diamond Safari, another excellent slot from Atomic Slot Lab, was recently published. The colourful game with a safari theme features captivating soundtracks that add to the fun of playing it.

Even though this slot game just has three game components, they all work effectively together. The gaming benefits, which include re-activable bonus spins, are something  players can anticipate. Play Diamond Safari and win.