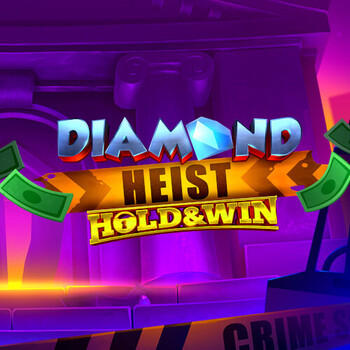 Produced by
iSoftBet
Pull off the perfect heist and win big in the Diamond Heist Hold & Win slot machine! This slot features cartoonish criminal capers sure to put a smile on your face and is jam-packed with more bonus features than a thief's swag bag. To find out more about this exciting new slot game, keep on reading!

There’s a whopping 6 bonus features on offer in the Diamond Heist Hold & Win game which begin with modifiers which can be triggered at random any time during the base game. The modifiers on offer are as follows:

Next up is the Heist Mode Feature which is awarded to players when they land three or more of the detonator symbols. Over the next 20 spins diamonds can appear on the reels. All diamonds will be collected and start to fill a meter. Collecting 5+ diamonds during Heist Mode will trigger the Diamond Heist Respins Feature.

This feature is what gives the Diamond Heist Hold & Win slot its ‘hold & win’ title. Players will be given three respins on a reel set that only has four symbols; blanks, diamonds, keys, and alarms. Each diamond that a player can land on the reels will become locked in place and will make the respins counter reset to 3. Landing a key symbol will unlock an additional row giving the player more chances to land diamonds. The key will also reset the counter to 3. The alarm lands as a blocking symbol and collecting three of these will immediately end the feature.

During the Diamond Heist Respin Feature players can win one of the three jackpot values:

Lastly the Diamond Heist Hold & Win game has a Free Spins Bonus Round which is triggered by landing three or more of the delivery truck scatters. Players can win 8-12 free spins and an increasing multiplier becomes active during the bonus. It’s also possible to retrigger the free spins bonus during the free spins itself.

If you want to try your hand at a heist or two then play the Diamond Heist Hold & Win slot game at Genting Casino.