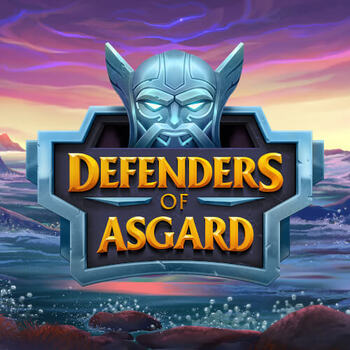 Produced by
High5Games
The Norse realm is plagued by war and Norse mythology’s utopia of Asgard is always in need of protection. Join the mighty Asgardians, from Thor to his father Odin, and defend their realm from the wrath of the Eternals and fight for the independence of Asgard. High 5 Games’ Defenders of Asgard is played on a 4 by 5 reel board giving players 10 paylines to win on. Sporting a high volatility and a 96% RTP, which is the industry average, players can win up to 4423x their stake. Read up more about this Asgardian adventure in this review.

About Defenders of Asgard

Defenders of Asgard slot game, provided by High 5 Games, features a 4 by 5 reel board, giving interested players 10 paylines to score wins. With a high volatility and an industry average of 96% RTP, players can win up to 4423x their bet for a minimum of 0.2 to a maximum of 200. Following the theme of Norse mythology, the symbols of Defenders of Asgard slot machine feature high-paying symbols including the mighty Thor and his father Odin, as well as other Warriors of Asgard, along with the standard symbols of A, K, Q, J, and 5. The game also incorporates two types of Wilds in the game which can substitute for all symbols except the bonus or other wild symbols, one of these types of wilds guarantees a payout for the player.

Lucky players can play a bonus game triggered by dropping 3 bonus symbols, which are represented the demon. Guaranteed payouts are then multiplied in Defenders of Asgard’s bonus game. Other features that the game has are Nudging Reels, Scatter Bucks, stacked wilds, and random multipliers.

Whilst playing, players can randomly experience a reel move up or down up to five positions to display a winning combination.

At the end of each spin in Defenders of Asgard online slot, wild symbols can appear on the reels. Each wild symbol can appear with credit values ranging from 10 to 2500 credits depending on the reel.

Defenders of Asgard at Genting Casino

Featuring a wide variety of games, including a collection of table games and live casino games, Genting Casino can satisfy any player’s slot game needs. Play Defenders of Asgard slot at Genting Casino and experience a high volatility Asgardian slot game adventure from High 5 Games. Join the Asgardian Warriors in this winner takes all scenario and win up to 4423x your stake! Play through bonus games, nudging reels, stacked wilds, and more in this Norse mythology slot game marvel when you log in to Genting Casino. Visit their website today!