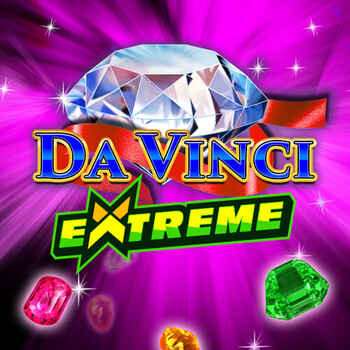 The figurehead of the High Renaissance art movement is coming to your favorite online slot game. Surely a treat for art fans and online slot players alike, High 5 Games' Da Vinci Extreme has five reels and a Tumbling Reels feature where players can win on every consecutive tumble. The game studio was also the brains behind the classic Da Vinci Diamonds slot game from IGT. Now with their own Tumbling Reels slot, slip on the Italian robes and explore Da Vinci Extreme. A 5x3 slot with 20 fixed paylines. The slot game falls within the history, art, and gems category. Underneath the reels is a streamlined interface. Symbols take on the form of three works of art. Mona Lisa, the musician portrait, and the Lady with an Ermine. Four additional lower-value colored gems, a Da Vinci gem, and a bonus symbol make up the reels.

The online slot is based on Leonardo da Vinci and his works during the Renaissance era. Regarded as a genius, he had his hands on all art mediums, mathematics, engineering, anatomy, and general science. The reels are set against a dark purple sky above the Italian nighttime. The reels are outlined with a golden frame like any masterpiece of its time. A soundtrack and mechanical sound effects are triggered with spins. Da Vinci Extreme moves at high volatility and works at a 96.2% RTP.

Da Vinci Extreme uses the Tumbling Reels mechanism, also referred to as cascading reels. On each spin, symbols will tumble into their allocated positions. Any winning combinations will be removed and new symbols will tumble down to fill the spaces, allowing a free respin. Cascading reels will go on indefinitely as long as winning combinations occur. Da Vinci's knowledge will lead to a masterpiece of a win. Play now.