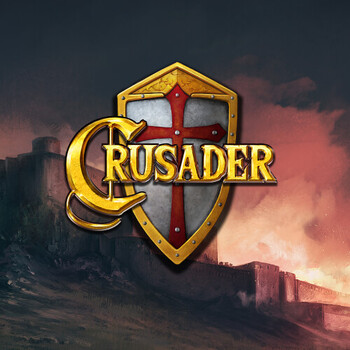 Produced by
Elk Studios
Crusader online slot is a game that borrows elements from previous ELK Studios releases, such as expanding reels and a historical theme, but it's still a fairly unique game with an original theme. The grid begins with 5 reels, 4 rows, and 26 paylines, but this can be expanded during the bonus round. Players can set traditional stakes ranging from 0.20 to 100 per spin, or use one of ELK's four pre-programmed betting strategies. The RTP for Crusader slot is 96.1% and the maximum possible win is 2,500x your stake on this high volatility slot.

Going over to the paytable, which is strewn with gold-encrusted, religiously tinged Crusade symbols. Except for the low pay, which are your standard Q-A royals with a knight-ish font. The high pays for Crusader game consist of three different cross symbols, a dagger, a box, and a chalice/grail, with the chalice/grail being the most valuable at ten times the stake for five of a kind. All pay symbols, including wilds, can appear stacked, as can any other pay symbol.

The game's key facts and statistics include a maths model with relatively high volatility that ELK has rated as an 8/10. This is somewhat mitigated by an official hit rate of 21.2 percent. The background of the Crusader slot game depicts a fortress on a hill at night in sombre red and dark tones. Overall, the graphics are good. The symbols used in the game are rich in detail.

The Crusader slot machine features are straightforward, and they all involve the Crusader symbol in some way. The first thing to know about the Crusader symbol is that it is a wild symbol that can replace any other regular pay symbol. It only appears on the first and fifth reels and lands fully or partially in view. If it is partially visible, it causes a Respin for each position it is nudged up or down until it is fully visible. If two Crusaders cover both reels at the same time, the bonus game and 8 free spins are triggered.

The Wild Crusaders on the outside reels remained locked in place during the Free Spins feature. In addition, a new symbol, an arrow, enters the game as the Expansion Symbol. When this symbol appears, it awards one free spin and expands the reels by adding one more row.

Crusader is designed with excellent graphics. This game is available at Genting Casino. The site offers a wider variety of slots, table games, and live casino games. Genting Casino online allows you to enjoy these games at the comfort of your own home on any device. Crusader is based on the crusades which fills this game with symbols from those times. It is a highly entertaining slot game with enough bonus rounds to keep both beginners and slots enthusiasts wanting to spin for more.