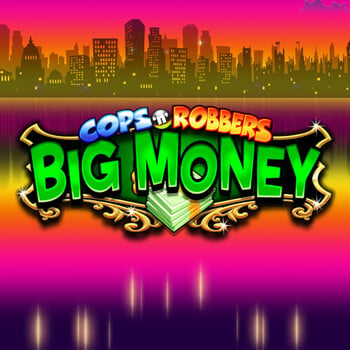 Produced by
Inspired
Cops 'n' Robbers Big Money game is an Inspired Gaming cops and robbers slot machine. It takes place on a pretty traditional playing field with five reels, three rows, and ten paylines—all of which pay just left to right. On the gameplay front, it provides entertaining Fortune Spins and bonus spins, but there are also a few places with some rather rough edges. The theoretical RTP of the slot machine is just 94.99 percent, which is more than 1 percent less than what casinos perceive to be the current par. Play Cops & Robber Big Money to know more.

The game Cops & Robbers Big Money online is easy to play. The game has a simple design with 3 rows and 5 reels, totaling 10 active paylines. Matching symbols must appear on at least three consecutive reels, starting from the leftmost reel, to form wins the conventional way.

Additionally, the 0.20 to 80 per spin betting range is a reasonable range that can be appropriate for most gamers.

The graphics of Cops 'n' Robbers Big Money online slot are one of the first things players will notice. Unlike its competitors, this game's graphics are not particularly stunning and have a rather antiquated style. The straightforward reels are in the centre of the screen, and the magnificent pink and yellow backdrop shows the London skyline at dusk.

The low-paying group of symbols are made up of variously colored 10-A royals. The high-value symbols, on the other hand, are represented by a police car, a stack of money, a police light, and the game's logo, and they have a payout potential of 200 times the wager for a full payline.

Some players might find it discouraging since the Cops 'n' Robbers Big Money slot machine RTP is capped at 94.99%, which is lower than the industry norm. Due to the mild volatility, the gameplay might also feature relatively regular awards with moderate values. Last but not least, the game has a maximum win potential of 3,125 times the bet.

For the Big Money Bonus feature to activate, at least three scatter symbols must land at once. When the bonus round is activated, a unique trail will appear above the reels, and you can collect both cop and robber symbols there. The multiplier will rise after you reach a particular spot on the trail (up to x10). The cop and the robber will advance along the trail with each symbol they gather until the robber is apprehended, starting the ID Parade feature.

One of three "suspects" will be chosen at random as part of the entertaining element called the ID Parade. Here are the potential results based on the chosen character:

The Gamble feature, which lets you spin two gamble wheels, can be activated after each winning combination. While the second one lets you wager for the Big Money Bonus feature, the first one has the potential to double your profits.

The graphics of Cops 'n' Robbers Big Money are particularly remarkable because the game features somewhat retro graphics that are incredibly captivating. Furthermore, the base game's gameplay is rather simple, but the dynamic supplementary elements strike a wonderful balance with it. This game is unquestionably worthwhile to try. Play Cops & Robbers Big Money and win big.