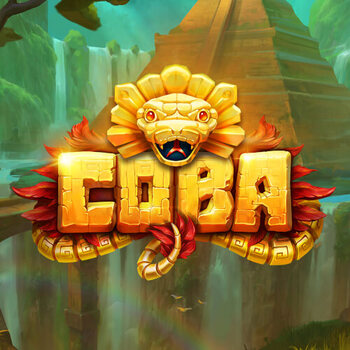 Produced by
Elk Studios
Coba game is a slot from ELK Studios that is based on a Mayan snake god. You play Coba on a 7×7 playing field and you win by making clusters of the same symbol. Using the Multiplier Wilds, you can win back up to 25,000 times your stake in the Coba slot game. The minimum bet that the slot machine uses is €0.20 and you can bet a maximum of 100.00 per round. The payout percentage scores below average at 95%, but is not necessarily a bad sign.

The playing field of the Coba slot online is something that immediately catches the eye. You could say that the playing field has dimensions of 7×7, but there are no reels in sight at all. The symbols of the Coba online slot do not lie straight and one row consists of more symbols than the other. In total, the playing field consists of 46 symbols. Wins are awarded for scoring five or more adjacent matching symbols, whilst the maximum possible win is an enormous 25,000x your bet.

A golden jewel bearing a skull logo is the highest-paying symbol of the bunch, with a return of 500x your stake if fifteen of them happen to line up on adjacent spaces. The same symbol of the Coba slot machine returns just 1x your stake if you only manage to land five of them next to each other on the grid, which gives you an idea of just how large the spread is between the minimum and maximum prizes awarded for each symbol in COBA. A red jewel takes second place on the paytable, and the prize for hitting fifteen of these is just 50x your stake – a tenth of the amount awarded for hitting the same number of the first-place golden jewel.

You can potentially hit combinations of between five and fifteen matching symbols organically when they drop in adjacent positions during regular play. However, the “snake metre” we mentioned earlier plays a big part in making the largest of these combinations possible.

Snakes appear from the right or left side of the board from the special golden nests. Snake is basically a moving winning cluster with a length of at least 5 elements. It moves randomly in different directions. The symbol of that winning cluster is the first symbol a snake moves to after its appearance or after respin. You'll see that symbol on the snake's head. All the following symbols the snake moves over will be transformed into Snake Symbol and become part of the snake (winning cluster), indicated by a golden frame around elements.