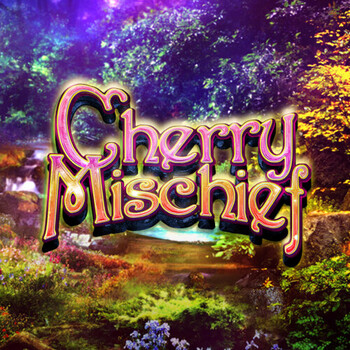 Somewhere in a mystical world where beautiful trees and vibrant flowers abound, lives a colony of fairies led by the Cherry Mischief. This slot transports you deep into the woods to find precious fairy treasure. It won’t be a walk in the park though because the fairies will use their magic and mischief to try and stop you. You’ll have to battle it out with the fairies if you want to walk away with a big prize. Cherry Mischief is available to play on desktop, mobile and tablet devices. Wager 0.01 to play one or more lines, or choose the max bet of 1.0 if you want a chance to haul in all the treasure.

The classic royals A-10 are the lower paying symbols. The Cherry Mischief and her friends can boost winnings by up to 50x the stake. Landing the free games symbols on reels 2, 3 and 4 at the same time or landing 9 anywhere on the reels triggers 7 free games. Look out for the Cherry Mischief wild symbols as these replace all symbols, except the fairy symbols, and award players with 10x the stake for two symbols, 50x for three, 250x for four and an impressive 1,000x for five. The Super Stack symbol can be used to replace all the symbols on the reels to increase your chance of cashing out multiple wins.

Play this fantasy slot by registering to Cherry Mischief at Genting Casino. Set a time session reminder for yourself so you know how long you have been playing. A winner knows when to stop gambling. Set your limits and stick within them.