Play Cat to the Future 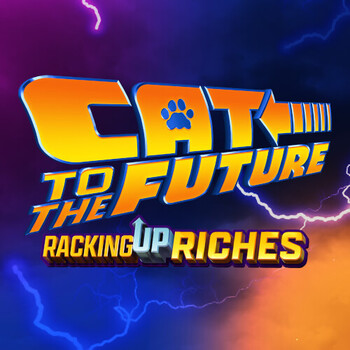 Produced by
High5Games
The Cat to the Future slot game is a punny title created by developers High 5. Featuring the characters from the Back to the Future franchise as cats, this strange title is a fun, high volatility adventure that some players will love and some players simply won’t. To find out what we have to say about this tongue-in-cheek slot, keep on reading.

About Cat to the Future

The Cat to the Future slot game is played on a stand 5x3 reel set which uses a generous 243 different ways to win with each and every spin you make, thanks to its feature called ‘Racking Up Riches’ which is similar to a tumbling reels feature (but more on this later). Featuring the characters of the Back to the Future franchise in kitty form, the Cat to the Future game has an RTP of 96% which is exactly the industry standard, so there are no surprises here.

Cat to the Future Features

The Cat to the Future slot machine features an interesting mix of bonus features beginning with the Wild Symbol which is the Delorian’s flux capacitor. As a wild symbol, this icon can substitute for all other special symbols to form winning combinations but doesn’t appear on reel number 1. Next up is a Free Games bonus feature, but High 5 hasn’t given us too much information about this as of yet. However, as a free spins feature in a fairly standard slot game, we can assume that this bonus will be triggered by landing three or more scatter symbols.

Cat to the Future at Genting Casino

The Cat to the Future slot online is definitely a quirky slot game, and if you like what this slot has to offer then keep your eyes peeled at Genting Casino to play the game as soon as it is released.