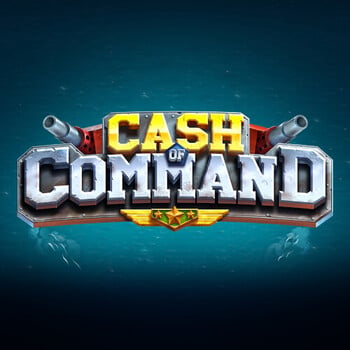 Produced by
Play N Go
Play'n GO has done it again with the release of their latest cluster-paying slot game, Cash of Command online slot. The overall theme for the game is a military battle, and the play takes place in a 9 by 9 transparent grid which seemingly floats in the ice-cold ocean used as a battlefield between several ship captains. Land cannons can be seen pointing at the sea which are great accents to fill the game interface. The play area is reminiscent of the classic game Battleship, with different warships occupying the reels as you spin. On the left of the grid is a gauge showing the different commanders. With the battle-theme, Cash of Command slot online definitely promises an action-packed gameplay experience that will keep spinners excited and coming back for more. Read along to know more before you play the Cash of Command slot.

About Cash of Command

The Cash of Command game is tagged as a high volatility game, which means that players can expect less regular payouts but may find themselves winning jackpots more quickly than with other games. The game has a 96.28% Return-To-Player percentage, making it a good choice for those looking for a chance to win big. To reach the max prize of 5,336 times the bet, it would be best to start playing at the max bet of 100. However, casual play is still possible at the lower bet of 0.10 per spin. The action takes place on 9 reels and 9 rows, and players aim to land groups of adjacently identical symbols using the cluster mechanic. Winning symbols stay on the reels with the cascade feature, giving players multiple chances to win with each spin. With its high potential payouts and exciting gameplay mechanics, the Cash of Command game is sure to provide hours of fun for all types of players.

The symbols for Cash of Command are composed of different military badges and warships. The badges pay higher as you go higher in rank.

The main feature for the Cash of Command slot machine is its cluster pay and cascading feature. Symbols of 5 or more indicate a win and several clusters can be present in a single spin. Wins are added and awarded, All winning symbols are removed from the reels and new symbols come down from the top of the reels to take their place to, again, form wins still counted as part of the initial spin.

On non-winning spins, the Barron's Turrets feature can randomly activate. The turrets shoot out wilds that fall on random places on the reels. Wilds replace all symbols to form clusters.

On winning spins, on the other hand and apart from cascading, the winning symbols are collected which fills the gauge on the left. There are 4 levels with values from 15, 40, 70 or 110 to trigger different sub-features:

Cash of Command at Genting Casino

In conclusion, the Cash of Command game is certainly one of those games you shouldn't pass up. The graphics and animation are amazing and will surely make the experience satisfying. And you can't go wrong with a top win of 5,336 your stake. Come and play Cash of Command, together with a lot more game titles, here in Genting Casino.