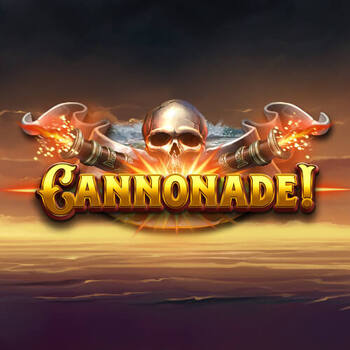 Produced by
Yggdrasil
The Cannonade! Edition has 6 reels, 5 rows, and up to 46,655 ways to win. You can bet anything from 0.20 to 20 per spin. This may not suit high-stakes players who prefer to take more risks, but it should suit the majority of players. Cannonade! edition online slot has an RTP of 96%, which is about average for this type of online slot. In terms of volatility, it is in the high range, so don't expect big wins all the time. However, with a hit frequency of 20.18%, in theory you can expect a winner to appear once every 5 spins on average. The maximum payout for the Cannonade Edition online is 20,000 times your bet.

The Cannonade edition game theme revolves around pirates and their quest for riches on the high seas. The plot revolves around a ship attempting to survive in perilous conditions. It's very nicely done, if a little simple. I like what they've done here, and it's not overly dramatic. Everything fits in nicely with the theme. The symbol animations are straightforward but effective.

The lower-paying symbols on the reels are 6 weapons. Higher-paying pirates with various coloured backgrounds join them. The Captain symbol is the most lucrative, paying 0.75, 1.25, or 2 times your stake for three, four, or five in a row.

When winning ways are hit, the Cannonade!  Win Streak function is activated. The winning symbols are locked in place, and one of the blocked positions on the reels where they landed is removed, allowing new symbols to appear. The unlocked symbols then respin. If new winning symbols appear, they are also locked in place, removing blocked positions from their reels and triggering another respin. If a win is created by more than one symbol type, the lowest-value winning symbol is upgraded to the highest-paying locked symbol. This process is repeated until no new winning symbols appear, at which point a win evaluation is performed.

Collecting three, four, or five Scatter symbols when you play Cannonade awards six, nine, or twelve free spins, respectively. Before the free spins begin, players may have the option of gambling them to potentially win more or collecting what was awarded and proceeding directly to the feature. A red and green segmented wheel spins to gamble. Landing on green grants +3 free spins, while landing on red results in the loss of all free spins. With one exception, Win Streaks remain active during free spins, and the rules are the same as in the base game. When a scatter symbol appears during the feature, it awards +1 free spins and removes the lowest paying symbol from the reels.

Play Cannonade slot at Genting Casino when you visit the site. The site contains a wonderful selection of slots, table games and live casino games. Enjoy these games wherever you are using any device when you visit Genting Casino online. Cannonade may have a theme that has been used on many slots but the unique gameplay and the possibility of a 20,000 times your stake payout can be very attractive to many slot players including beginners.