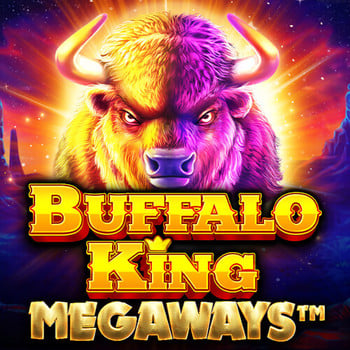 Produced by
Pragmatic
You will live the prairie lifestyle when playing Buffalo King Megaways slot. With some differences from the first version of the game, you now have tumblers formerly called cascades, and the Ante Bet that helps you acquire free spins. There are also three bonus games. It means more opportunities for players to increase their winnings and more free spins to cash out for money.

You have many ways to win if you hit one of the three bonuses during gameplay. Spinning may get you good wins too if the spin gods are with you when you play Buffalo King Megaways. Via the Ante Bet feature, players double their chances of triggering free spins. Anyway, the Ante Bet does not affect symbol values. The RTP of the game is 96.50%.

While playing the Buffalo King Megaways slot online, you have 200,704 ways to win. This is a massive difference to 4,096 ways of the original version. All the icons on this slot are wild animals typical from North America: moose, wolves, cougars, eagles, and buffalo. The last one is worth 20 times your stake. With this slot, players can win 5,000x their bet.

When you play Buffalo King Megaways slot, the free spin feature will occur if you hit the space bar for the turbo spin. Note that the top four are always horizontal and the vertical is the other reels. When you win, the reels look like they are breathing in a V-shape from the left side of the screen to the right.

Of the several bonus features, the biggest to look for is the tumble. When you win, this feature kicks in and clears the reels from all winning symbols. When the feature has a pause, it's because the winning symbols have finally stopped creating winning combinations in the cleared spaces on the board. As long as wins keep on lining up, tumbles keep on coming.

The next greatest feature is the wild symbol. Appearing on reels 2,3 or 4 it replaces standard pay symbols. Multipliers help increase your win when the wild symbol appears. It appears attached with x2, x3, or x5 multipliers. These values accrue on single spins. Examples: You might get an x2 on the initial win and on the next tumble an x3.

In conclusion, Buffalo Kings Megaways is a fun and interesting game with lots of differences from the original that should encourage fans to try it out immediately. This highly volatile game has a lot of new bonus features that will excite the players. The stampede after your tumble, wilds with juicy multipliers, bonus coins to increase winnings, and free spins are what make this slot a hit.