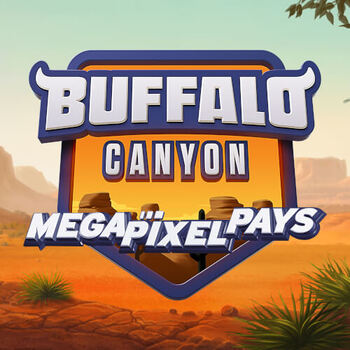 Produced by
High5Games
The Buffalo Canyon slot from High 5 Games features a novel Megapixel Pays concept that allows you to win up to 1,101 times your initial wager. The game is played on a huge 2,400-dot grid, and as symbols land on the reels, they charge the dots, adding points to the jackpot. The Buffalo Canyon game has a return to players rate of 96 percent and medium volatility. Play Buffalo Canyon for as little as 0.20 and all the way up to 400 per spin.

The stunning natural environment background of Buffalo Canyon slot game, which includes cliffs, vast plains, and flashes of vegetation, pairs beautifully with the ultra-modern megapixel reel design. The symbols in the game are presented in the manner of pixel art rather than images, giving the reels themselves a noticeably more futuristic aspect.

A medium volatility game from High 5 Games called The Buffalo Canyon slot online has a potential return to player (RTP) of 96 percent.

The fact that Buffalo Canyon online slot is played on a 2,400-dot grid sets it apart from many other no-deposit slots. Paytable symbols will be randomly positioned on the screen during each spin and may cross over certain dot grid regions. Each symbol may take the form of a light blue, purple, or grey symbol.

Buffalo Canyon allows players to wager as little as 0.20 and as much as 400.00, making it perfect for high rollers. On the other hand, players who favour making tiny bets could discover that this game isn't appropriate for their style of play.

When all of the dots on the screen have been upgraded or downgraded in accordance with the preceding spin, all symbols other than the crystal scatter will pay out. A complete symbol must land inside the dotted grid in order to be paid out.

Buffalo Canyon slot machine has few but amazing bonus features. The dots each symbol upgrades by 2, 3, or 4 levels depending on whether it appears as a grey, blue, or purple sign. To the minimum level 1 after each spin, any dots that are not covered by any symbols will drop one level. Remember that only symbols that are completely visible result in payouts. When such a symbol appears, all the dots it crosses over add points to the payment in the manner shown below:

Additionally, each symbol has a corresponding point multiplier. Every point the dots have provided is multiplied by the appropriate point multiplier when you win. The sum of all points from dots that are overlapped by a symbol multiplied by the bet multiplier, divided by 100, and rounded down to the nearest dollar amount determines the total amount awarded for each symbol. After playing a few game rounds, the system may initially seem confusing, but you'll quickly understand what everything means.

The bonus spins bonus is triggered during the base game when three or more instances of the tiny crystal symbols (Scatters) appear anywhere on the grid. 12, 16, or 20 bonus spins are given when 3, 4, or 5 triggering symbols land on the screen, respectively. A key distinction between the bonus game and the regular game is that during the feature, dots do not degrade.

The game Buffalo Canyon is fantastic. This fast-paced slot, which combines traditional design with cutting-edge mechanics, is adaptable enough to accommodate a variety of playing styles thanks to its wide bet variation and respectable x1,101 top win. It's the ideal choice for people who want to encounter new things instead of playing the same old slots. Play Buffalo Canyon and win.