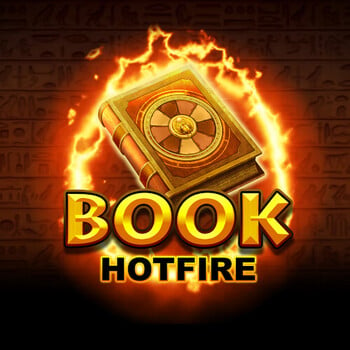 Produced by
Yggdrasil
A cooperation, Book Hotfire game is being created by AceRun and made available at Yggdrasil's casinos. There will only be 10 paylines available in the normal gaming area, which has 5x3 reels. a maximum jackpot of 5,000 times the bet. Book HOTFIRE slot game has a return to players rate of 96.1 percent and high volatility. The game's layout is based on a theme of ancient Egypt, and we find ourselves inside a crypt where substantial payouts are only waiting to be claimed. Play Book HOTFIRE for as low as 0.20 and all the way up to 50 per spin.

AceRun's Book HOTFIRE slot online has five reels, three rows, and ten paylines. You have the option of placing a minimum wager of 0.20 or a maximum wager of 50. It is a slot machine with a lower-than-average RTP, and the RTP for this particular game is 95.1 percent. You can win up to 5000X your stake at Book HOTFIRE online slot, which has a high volatility and a greater hit frequency of 40.8 percent.

A few fantastic features are available to us in this Egyptian gaming experience where we play amid a powerful pharaoh to aid us in our pursuit of the maximum gain. Free Spins and a Wild Symbol are the features.

The game's layout is based on a theme of ancient Egypt, and we find ourselves inside a crypt where substantial payouts are only waiting to be claimed. Large flames of fire surround the reels, and carved symbols can be seen on the walls in the backdrop. It is a slot machine that is compatible with all platforms, including mobile, desktop, and notepads. When three or more of the same kind of symbols appear on adjacent reels starting from the leftmost reel, you have created a winning combination. When two of the same symbol type have landed on adjacent reels, the higher earning symbols start paying right away.

The numbers 10, J, Q, K, and A have smaller payouts. Between 10X and 15X the bet is paid when five of the same symbol type are landed. The eye of Horus, Anubis, Isis, and Pharaoh are the symbols with the highest payouts. It rewards between 75X and 500X the stake if you get five of the same kind of symbol. The game's book-themed icon serves as both the wild and scatter symbols.

In Book Hotfire slot machine, there are a total of nine pay symbols, and it is rather simple to distinguish between the low and high payouts. After all, card ranks are what determines the low payouts. However, this does not imply that they offer little income. For a full set of Kings or Aces, you may actually win up to 15 times your wager. There are several hieroglyphs for big payouts, with the highest-paying symbol resembling a golden mask. Keep an eye out for this symbol since a five-of-a-kind combination will pay 500x your wager.

There is only one special symbol in Book Hotfire, which is typical for "Book of" slots, and it does actually resemble a book. It serves as both the slot machine's Scatter and Wild.

You'll start the Free Spins feature with 10 free spins if you land three or more Book symbols anywhere on the playing field. It's nice that getting another set of Book icons will also award you with 10 additional free spins.

The key difference is that during free spins, the game will randomly choose one of the pay symbols to act as an Expanding symbol. All occurrences of that symbol have the ability to extend to fill entire reels and even pay when they are not contiguous

Book HOTFIRE is a great slot machine to play. The scatter symbol doubles as the game's wild symbol on this slot machine, which helps increase the number of winning combos that can be formed during a spin. The free spins feature begins when you hit three or more of these in a row. Even with little features, the game can still be enjoyable and worthwhile to play. Play Book HOTFIRE slot and win.