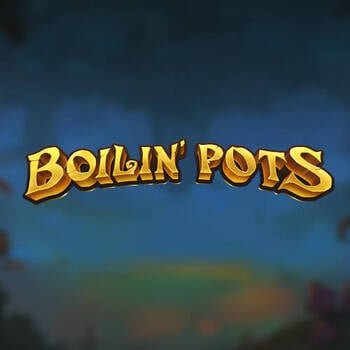 Embark on a magical journey on this slot as you brew mystical concoctions to land delightful wins and enjoy the most potent spells in the bonus features to land the biggest rewards. Watch the game grid expand to 7 rows high, increasing ways to win to an astonishing 16,807.  Fire up the Boilin’ Pots online slot for a bet of 0.10 to 40 per spin.

Wins are created by landing at least three identical symbols from left to right.  Set in a 5x3 grid, the paytable consists of mandrake roots, claws, eyeballs, wings, and potion bottles as the low pays.  Four gem tiles and a book make up the premiums where landing 5 matching symbols on a line earn from 1.5 to 10x the bet . Toadstools are the wild and replace any regular paying symbol.

Keep an eye out for the arrow symbol.  Hit at least one arrow to add an extra row to the game panel, growing to 7 rows high if enough arrow symbols hit.  Land four arrow symbols on a single spin to trigger the Wild Respins feature. Respins continue to be awarded as long as winning combinations are formed.  The feature ends when no win appears, and returns to the base game layout.

Landing three or four scatter symbols awards a payout of 10x or 100x the bet respectively, and activates the Rising Reels Bonus round.  Played on a 5x7 sized grid, Cash Symbols may land with values from 1x to 50x the bet. There are Win Symbols too which are worth between 100x, to 5,000x the bet.  Receive three spins whenever a cash or win symbol appears on the payline row. The round continues until the guaranteed win of 5x the bet is achieved or more. Players can opt to buy the bonus round at the cost of 50x the stake.

Register to Boilin’ Pots at Genting Casino to start spinning. Know your limits and be clear about them before you start gambling.  When you reach your limit, stop gambling.