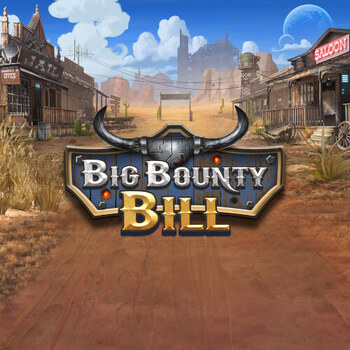 Travel back to the dusty old town on the frontier and join the journey to the Badlands in dogged pursuit of a gallery of original villains to reel in big prizes in this Retro-futurist slots adventure.

The scene is capped off by a pair of moons in the top right corner and a brutalist structure in the distance. It's done nicely, and you can tell you're no longer in Kansas without feeling overwhelmed by alienness. You'll also note the game grid, which is 5x4 but contains three additional rows covered by blocking tiles. The baseline game begins with 1,024 win ways, which rise substantially after the blocked rows are revealed.

Stakes range from 0.30 to 300 each spin in uncommon denominations. It also offers a 98.98% RTP (Return to Player). Symbol values are low on their own and need as much help as possible from expanded reels and win ways as possible. 9 - A start off the paytable, followed by a horse and a bull. The character symbols come next, and they don't give much information about them other than the fact that they are all villains. The female villain comes first, followed by the man villain with a gun, and finally by the male villain with a cigar, who must be Bill and is worth 3.3 times the stake for 5 of a kind. That may not sound like much, but as the rows are expanded, satisfactory amounts are possible. With a 27% hit rate, the card royals need three of a kind to pay out, while the picture symbols only need two.

Wear your bandana and meet the gunslinger as you sign up for Big Bounty Bill at Genting Casino, which is accessible on any mobile device. We encourage you to play sensibly and avoid playing more than is necessary.