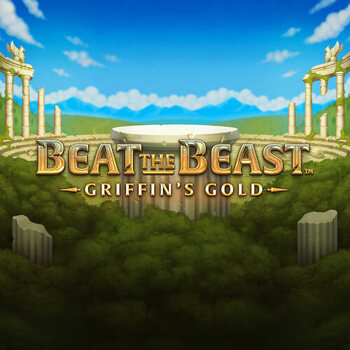 The mythical creature Griffin was known for guarding treasures of the kings and other priceless possessions. The game is set in a 5-reel, 3-row grid, in an old temple with nine fixed paylines. When the bonus game is triggered, the temple is restored to its former glory. There are 12 symbols in total with 10 regulars, plus a scatter and wild. Regular pays start with 10-A royals needing a minimum of three to win, while the high pay crossbow, feather, lyre, Griffin statue, and Griffin need only two. Premiums are quite valuable, ranging from 20x to 150x for lines of five. The bonus game harnesses the thrilling power of multiplying wild multipliers. To get to the best bits, you’ll need the Griffin Emblem symbol. In the base game, it appears in one of its guises as the wild, substituting for any regular pay symbol. Its other job is scatter where 3, 4, or 5 in view award 10 free spin plus a payout of 2x, 20x, or 200x, respectively.

A new roaming wild enters the bonus game, substituting for any other symbol. Roaming wilds remain on the reels for the duration of the feature. Before each new free spin, it moves to an adjacent position. Roaming wilds also carry a multiplier starting at x1. After a spin where the roaming wild is included in one or more wins, its multiplier increases by +1 up to x5 max. If a win occurs on a payline, including more than one roaming wild, their values are multiplied together. The highest possible multiplier is 125x (5x5x5), which should get you on the way to cracking the games’ Griffin sized potential. Spins where one or more roaming wilds were used in a win awards 1 extra free spin. When Griffin is in full flight, the game produces a win figure of 22,222x the stake.

Register to Beat the Beast: Griffin’s Gold on Genting Casino, playable on all mobile devices. Check your play summary to see your game spending.  Gamble responsibly.