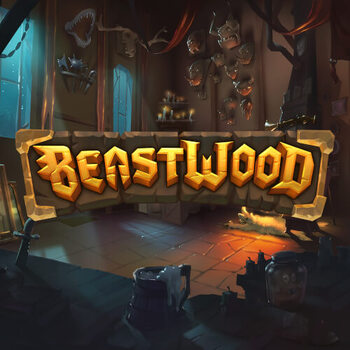 Produced by
Quickspin
In the Quickspin slot machine Beastwood slot, go monster hunting in search of fame and money. A new reel with more opportunities to win is added after each win thanks to the Endless Reels mechanism. Winnings continue to increase symbol win multipliers. Reel multipliers are another option, and they quadruple those Symbol Win multipliers. All of this is relevant to the Free Spins feature, where Reel Multipliers are more quickly activated than they are in the base game. Beastwood has 29,541.2 x bet max wins and an RTP rate of 96.11 percent. Play Beastwood for as little as 0.20.

There are initially 3 reels, 4 rows, and 64 ways to win in the Beastwood game (4x4x4 = 64). When the last three reels, starting with the leftmost reel, all contain the same symbol, a winning combination is created. The more symbols that appear on successive reels using an Endless Reels principle, the more multipliers are activated.

Per spin, bet levels range from 0.20 to 100. To view the 15 stake options available, click the Coins symbol.

The RTP for Beastwood slot game is 96.11 percent. This is a little higher than the 96% slots average. 67.18 percent of that return will come from the regular game, and 28.93 percent will come from the bonus rounds. Be careful because the volatility is really high (5/5) The odds of winning 100 times your wager or more are 1 in 1,140 spins.

The maximum payoff for a win is 29,541.2 times your entire stake every spin. Once every 100 million spins, this happens. The Symbol Win and Reel Multipliers will produce the greatest payouts.

The Beastwood slot online has a creature theme and has a distinctive design. You go in search of monsters with Mr. Beastwood in the made-up Beastwood woodlands. The former sea bandit swiftly abandoned his crew at sea to enter the monster-hunting industry with reputation and wealth on the line.

A, K, Q, J, and 10 royals are among the symbols found on the reels. The four symbols with medium value are represented by four monsters. Mr. Beastwood, the highest paying symbol, pays 2.5 times your total wager when three appear on successive reels.

Then there is a golden wild symbol with horns. Except for the Wax Seal Bonus sign, this can replace all other symbols.

Four extra features are included in The Beastwood online slot.

Any successful combination activates the Endless Reels feature at the start of the game, which has 3 reels and 64 chances to win. A new reel is introduced to the right side of the reels once winnings are assessed. A new reel is introduced whenever extending an existing win with an additional reel. The scroll on which the reels are mounted extends as more reels are added.

Starting with reel 5, every third reel in the base game has a reel multiplier. A 2x multiplier is attached, and it is applied to the winnings.

When 4 or more Wax Seal Bonus symbols appear anywhere on the screen during the base game, the Free Spins feature is triggered. Any additional Bonus symbol will grant you an additional 3 free spins after the initial 10 have been played.

The scene now shifts to a forest. Every reel beginning with reel 4 has a Reel Multiplier of 2x throughout the feature. Keep an eye out for bonus symbols since each one will grant you a limitless additional free spin.

The game Beastwood slot machine seems intriguing. The animated creatures and aesthetics are just outstanding. The smooth addition of new reels with victory markings is impressive. But earning Symbol Win Multipliers is key because they can significantly increase your chances of winning. The multiplier can swiftly double if more than one winning symbol appears on the reels. For Quickspin, the Endless Reels mechanic is a novel idea. The 29,541x wager is profitable. Play Beastwood and win.