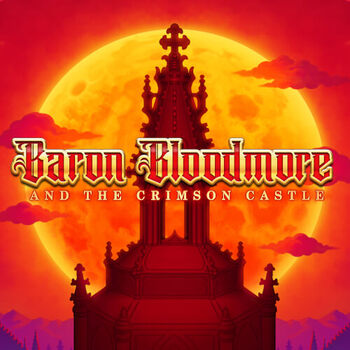 Take a walk on the undead side in this creepy vampire-theme slot. Deep in the Crimson Castle beneath the 5-reel, 3-row grid, lies Baron Bloodmore in his coffin, biding his time until sundown. Snatch loot during daylight, picking bets from 10-100 per spin. Twenty-five fixed paylines can land winning combinations of 3-5 of a kind to collect coins.

Eight pay symbols are on hand from 4 J-A card tiles to ravens, wolves, gargoyles, and the Baron himself brooding at the top. Premium symbols generate wins of 10 to 30x the stake for five of a kind. Three vampire sisters appear as wild symbols, each one with the same capabilities. Wilds substitute for pay symbols to form winning lines, and if they land in combinations of their own, they have the same value as Baron Bloodmore. Massive mystery symbols appear either partially or in full view on the middle three reels. They can turn up randomly during the base game and  in the free spins bonus round. When it hits, an oversized symbol changes into a pay symbol or a wild. Winged skull symbols are the scatters, and 3, 4, or 5 in view award 10, 15, or 20 free spins.

During the bonus game, a pattern of 5 illuminated symbols positions may appear. When filled, the bet multiplier is added together. The total amount is added to the middle symbols and then doubled. All affected symbols, except the middle position, are removed to generate a new pattern.

At 25,000x the bet, this game produces some of the biggest wins.

Register to Baron Bloodmore and the Crimson Castle on Genting Casino, playable on all mobile devices. Keep it a game. Don’t chase losses.