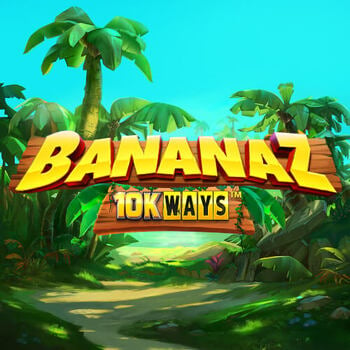 Join Monkey Mike as he ventures into the jungle in this Bananaz 10K Ways slot. The appearance of Monkey Mike and all his jungle friends makes this more than obvious once you launch the game.

Bananaz 10K Ways features a 6x4 slot layout with an extra row of four symbols across the middle four reels. The layout is similar to Megaways, but the distinction here is that the symbol-per-reel number is constantly locked, which is where the 10,000 ways to win mechanic comes in.

When the Mike Goes Bananaz feature is activated, 1-3 symbols become the Monkey Mike wild. These wilds will then substitute for any other basic game symbol to aid in the formation of winning combos. Each Monkey Mike symbol also contains a random multiplier ranging from 1x to 5x, which is used to any wins it generates.

To trigger the respins feature, you must land at least four banana bunch scatters. If you do, you will be awarded three respins, and all triggering scatters will turn into banana symbols with multiplier values. Every time a spin lands at least one symbol, your respin number is reset to three. If you reach 0 respins and no new symbols appear, the bonus game finishes.

Only the banana, banana bunch, and monkey mike symbols are used during the bonus game, and each one serves as a bonus symbol with a unique payoff feature: “Banana bunch symbols collect all adjacent symbol values and combine them”, “Monkey mike symbols collect all prize symbol values that result in a global multiplier”, “Banana symbols reveal multipliers worth anywhere from 1x to 1,000x” The range of bet sizes is 0.25 to 50.

Discover everything about this slot as you register to Bananaz 10k Ways slot on Genting Casino on any mobile device. You may specify your total spending cap and just be careful not to play more games than required in an effort to win rewards.