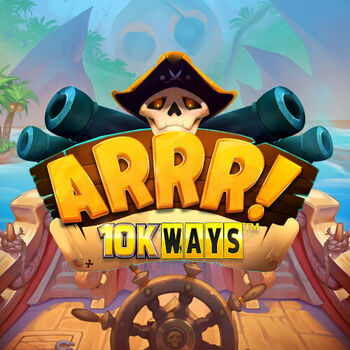 Produced by
Yggdrasil
ARRR! 10K Ways slot machine is a pirate-themed slot from Reel Play, and it comes with 6x4 reels, 1 top reel and 10,000 win ways. Randomly triggered Cannon Wilds with up to x5 multipliers can extend cascading sequences, and the hold-and-win style Bonus Respins feature gives you two collector modifier symbols. The minimum and maximum bets are 0.20 and 12 respectively. The ARRR! 10K Ways online slot is highly volatile, and the RTP is 94%. The lucky player who wins the most money will receive 20,000X their stake.

The ARRR! 10K Ways slot online appears to be set in a tropical paradise, with the reels positioned at the bow of a pirate ship, as one might expect. Palm trees and the blue ocean can be seen to the left of the reels. The background colours turn red and the audio speeds up for more intense gameplay when you use the Respin feature.

For a pirate-themed slot, the soundtrack is unique. It sounds almost fairytale-like at first, but it's actually quite enjoyable. When a winning combination appears, the symbols explode from the reels with the sound of a cannon being fired.

Low-paying diamonds, hearts, clubs, and spades, as well as anchors and skulls, can be found on the reels. An octopus, a parrot, and a female and male pirate are the higher-paying symbols. The male pirate is the most lucrative symbol, paying 1, 2.5, 5, 15, or 50 times your stake for combinations of 2, 3, 4, 5, or 6. The Jolly Roger symbol, which replaces all symbols except the Treasure Chest, is the game's Wild. However, the Wild will only appear during Cannon Wilds and will come with a 1-5x multiplier.

ARRR! 10K Ways slot game has a few decent features to keep you going. On a non-winning spin, the Cannon Wild feature may activate. This increases the number of Jolly Roger Wilds on the grid by 1 to 3. Each of these wilds has a multiplier ranging from x1 to x5 that is applied to any win in which the wild appears.

You can play Arrr! 10K Ways at Genting Casino. You can visit the site and be treated to a wide array of slots, table games, and live casino games. When you play Arrr! 10K Ways slot you are treated to pirate themed slot machines with great features. The maximum possible win of 20,000x your stake will be interesting for high-rollers. In general, the ARRR! The 10K Ways game is a solid online slot that we believe will appeal to a wide range of players.