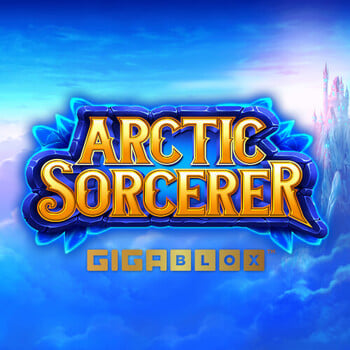 When you play Arctic Sorcerer Gigablox you will notice that it is set in the frigid polar region, and its ice spells in the Arctic Blast have the power to make it into a money-making machine. The sorcerer is perched on a rocky outcrop to the left of the reels, and to the right of the reels is a huge peaky mountain with a castle on top. He has long red hair and is dressed in a blue coat and furs. A blue ice ball soars above his right hand. Five different gems in various colours are the lower-paying symbols in the Arctic Sorcerer Gigablox slot game. You will receive 1x the bet if you land 6 of the purple, blue, red, green, or golden stones. Some of the few animals that can endure in the Arctic are represented by the higher-paying symbols. The player will receive between 1.5x and 5x their stake if there is a winline of 6 with the reindeer, owl, wolf, or polar bear. You've probably noticed that the symbols don't pay off very well; your goal is to hit multiple wins on the 50 paylines.

TheArctic Sorcerer Gigablox slot machine makes use of the Megablox mechanic, which allows large symbols to land and then divide into a number of smaller symbols of the same type.

At least one oversized Megablox symbol will appear on the grid after each spin. The size of the symbol can range from 2x2 to 5x5. Depending on its size, it will change into 4 to 25 regular symbols after touching down. You must place at least three symbols along any of the 50 paylines that run from left to right in order to win.

The "Wild" symbol is represented by a golden coin with the word "wild" written on it. The wild symbol also appears as X2 during free spins, doubling all wins it contributes to.

A close-up of a diamond with Northern Lights in the distance serves as the Scatter Symbol. The free spins must be triggered by at least 5 Scatter symbols, and each one awards 1, 2, or 3 spins.

During both the base game and the free spins, the Arctic Blast feature can activate at any time. One or more mysterious Gigablox symbols are fired onto the grid by the sorcerer. When the Gigablox lands, the sorcerer uses his magic to change it into one of the following seven symbols: a polar bear, a wolf, a gold gem, a blue gem, a purple gem, a Scatter symbol, or a Wild symbol.

Arctic Sorcerer Gigablox is available at Genting Casino. The site contains a wide variety of slots, table games and live casino games for players to choose from. Genting Casino online allows you to enjoy these games at the comfort of your own home using any device. Arctic Sorcerer Gigablox combines excellent graphics and unique gameplay to deliver an exciting slot machine. We highly recommend this slot for both beginner and high-roller and players who enjoy games with a variety of features and a chance at large wins.