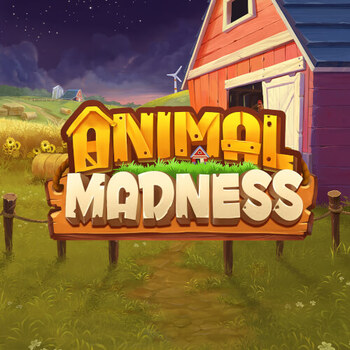 Produced by
Play N Go
Take the scenic route and stop by a quaint, little farm in Play’n Go’s Animal Madness online slot game! This farm-themed slot game from Play’n GO is played with the Cluster Pays mechanic which requires at least 4 matching symbols to be connected together to form a win. As you play Animal Madness, activate bonus features such as different modifiers and a randomly activated Rabbit Mayhem feature, all the while playing for the game’s max win of up to 2,250x your stake!

The Animal Madness game is a farm-themed slot game by Play’n GO which features a band of funny-looking farm animals as well as various farm crops as the game’s symbols. Farm animals such as chickens, goats, sheep, and cows make up the game’s high-paying symbols which can pay from 0.8x to 2x for four matching symbols, with a max of up to 400x to 1800x the bet for 18+ sized clusters. Various crops such as wheat, corn, tomatoes, and pumpkins make up the lower-pays which can award you with 0.2x the bet for four matching symbols but can reach up to 40x to 200x the bet for 18+sized clusters. There are also various Wild symbols in the game. Each type of Wild symbol can substitute for all paying symbols in the game to help complete winning clusters.

You can start spinning the reels of the game with a bet starting from 0.10 up to a maximum of 100 per spin. The Animal Madness slot machine has an RTP that can range from 84.20% to 96.20%, and a medium volatility.

As with all Cluster Pays slot games, winning clusters disappear from the game board. In the Animal Madness slot game, winning clusters zoom to feed the quirky-looking sunflower planted next to the game’s reels. This sunflower can get you some modifiers. Another feature of the game is its Rabbit Mayhem bonus feature.

Modifiers from the Sunflower

This feature is randomly given after a non-winning spin. When this is activated, random symbols will be removed from the grid, possibly causing a cascade.

As you play Animal Madness slot, you will definitely enjoy the game’s bright and bold style which makes for quite a humorous and fun slot game. Animal Madness is made even more interesting by the various modifiers you can get after consecutive cascades, the Rabbit Mayhem bonus feature, and the chance to win up to 2,250x your stake! This quaint, yet enjoyable, farm-themed slot game can be found at the Genting Casino amongst our collection of online slot games and table games! Come on over and play the Animal Madness slot online at the Genting Casino website!