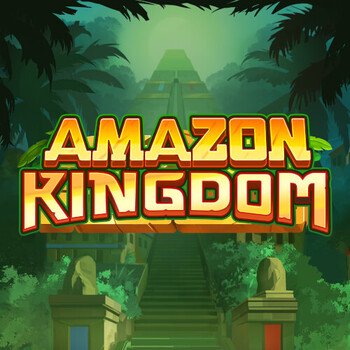 Produced by
Just For The Win
Amazon Kingdom game is a sequel slot from Just For The Win with an Aztec theme. It has 5x3 reels and 30 paylines. To activate the growing Wild Scroll feature and the Queen's Bonus choose game, which offers winnings up to 5,000x, collect three bonus symbols above the reels. The bonus round's super version has two wild scrolls per spin as opposed to one. The return on investment for Amazon Kingdom is 94.23 percent. Gamblers can also play Amazon Kingdom slot for as low as 0.2 and all the way to 50 per spin.

The actions in Amazon Kingdom slot game take place on a 5-reel, 4-row game grid with 30 fixed paylines. It is a very unpredictable game. When three of anything else or at least two of the character symbols appear in adjacent reels from the left, a win is triggered. The game is simple to play because it is simple to play.

Three RTP options are available for the game, with 96.21 percent being the maximum potential return. Amazon Kingdom is playable on any device and allows bets as low as 0.20 or as high as 50 per spin.

Whenever you load Amazon Kingdom slot online, the male and female characters whose sizes range from 1x1 to 1x4 are the most intriguing symbols. They are the most valuable since five of a type pays 10 times the bet. Before reaching the J-A card ranks, where a line of five is worth 1-1.5 times the wager, we encounter three animalistic icons that pay 2-4x the bet for five of a kind. Additionally, wilds can show up on the grid in a number of ways, one of which is when they organically land. No matter how they appear, wilds can be used in place of any pay sign and, if they form winning lines, have the same value as the top two premium symbols.

The bonus pick game still offers the chance to win up to 5,000 times your wager, but it only appears occasionally in this game. Collecting symbol pairs for free spins will eventually start a more upgraded super bonus round in addition to the ordinary bonus round. It comes with two guaranteed wild scrolls as opposed to one, plus it has a larger multiplier. The maximum possible win is 5,000 times your bet.

Amazing features in Amazon Kingdom online slot will result in significant wins. Each reel's Bonus Holder holds all bonus symbols that land there. While only one bonus symbol needs to be collected on a reel in order to start the Queen's Bonus feature, collecting three bonus symbols will start the Wild Scroll feature for that reel. Starting at the top of the reel, the Wild Scroll symbol moves down one slot with each subsequent spin. Once it has extended to fill the entire reel, it is removed.

When a bonus symbol is acquired, the Queen's Bonus may be activated at random, allowing you to choose from 12 gold coins. You'll keep picking until you've matched three symbols for cash rewards, at which point you'll be assured of receiving one of the four prizes. They return 15x, 40x, 200x, or 5,000x your initial wager.

In the base game, the free spins symbols might occur on reels 2, 3, and 4. Three of these symbols must be visible to start the bonus round. During the feature, all wins are multiplied by x2 and a wild scroll is positioned on top of reel 3 for each spin.

In the base game, landing just two free spins symbols increases the Free Spins Upgrade Metre (on the right) by one point. When the metre reaches 20 points, a Super Free Spins variant is activated the following time you land three free spins symbols. The win multiplier is then increased to x5, and Wild Scrolls appear on reels 2 and 4.

Amazon Kingdom slot machine is a pretty solid game with amazing graphics and gameplay. The features are generous enough to provide players significant winnings. When playing in the special feature, wild scrolls gradually expand rather than starting off completely expanded and then contracting, which makes the game feel more intense. Amazon Kingdom is worth a shot because it offers payouts of up to 5000 times the wager. Play Amazon Kingdom and win.