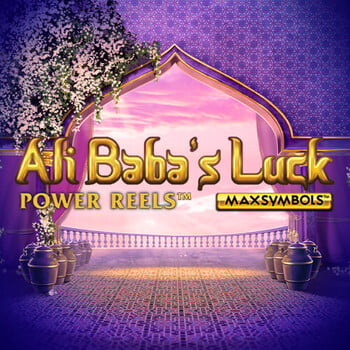 Open sesame your way to dusty good times in Ali Baba's Luck slot. We might not be in Ancient Egypt this time, but sun worshipers don't miss out.

The Ali Baba's Luck Power Reels slot is a 5-reel slot with 10 paylines. Low pay is 10-A royals written in a font that resembles Arabic. The high pays offer a prize when just two cards land, whereas this group requires at least three of a kind to produce a winner. Ali, who is worth 500x for a line of five, is the highest paying, followed by an Arabian princess, a gold pot, and a gold ring.

Luck is given a nudge by the features which are frequent and effective. The winning symbol in the base game turns golden and is highlighted above the reels whenever you win. Then, only on the subsequent spin, if three or more golden symbols appear separately on the reels, they grow to fill the entire reel. Expanded reels don't have to be contiguous to pay; they can be in any position.

When three scatters show up anywhere on the reels, the open sesame moment happens. They also open the Lucky Round, which is a wheel with various values. The number of Dream Spins awarded depends on where the wheel lands. When the feature is activated by landing 4 or 5 scatters, 4 or 8 more bonus spins are added, correspondingly. Golden symbols do not reset to their original state at the end of Dreams Spins; instead, they stay locked for the entire period. The feature can also be retriggered by landing three or more scatters of the treasure chests. The range of bet sizes is 0.05 to 30.

At Genting Casino, Ali Baba's Luck Power Reels may be played on any mobile device; all you have to do is register and establish a spending cap. However, if you want to gain rewards, be careful not to play more than is actually necessary.