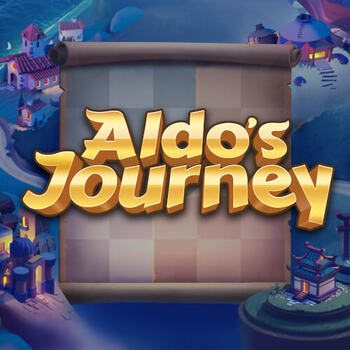 Time to travel the world with Aldo’s Journey made by Yggdrasil Gaming. We join the adventurer Aldo, who is in search of great treasures from all around the world.  Join him as he goes to countries like China, Italy, Mongolia and Persia. He is said to be a merchant who looks like the famous explorer Marco Polo.

Bets can be set from 10 or as high as 100 with an attractive RTP of 96.5%. The game is set on a 5x5 grid spins with what can look like a typical cluster system at first, but which actually uses 65 fixed paylines.  Low pay symbols are the four card suits - hearts, clubs, spades, and diamonds worth 0.2x to 1x the stake. Aldo himself is considered  to be the wild symbol. This means that he can substitute any symbol to make the combinations, however it can not replace the scatter symbol.  An old compass is considered as the scatter symbol for the game.

And if there are 3 or more scatter symbols landed on the spin, it will award you 7 free spins and given the option of sections named after places that have a special condition for the free spins. It is with one’s discretion on what would be the best course to go to to maximize or yield the best results.

Aldo’s Journey indeed wants to build a storyline along with its unique gameplay. Something that other games did not make an effort to because of how tedious and complicated it can be to develop it. Also slot games would be very boring if not given an engaging plot and characters that players can also root for.

There is also a possible series that can start with this game which can also adapt the same format with more features. But for now it would be great to join Aldo in his journey.