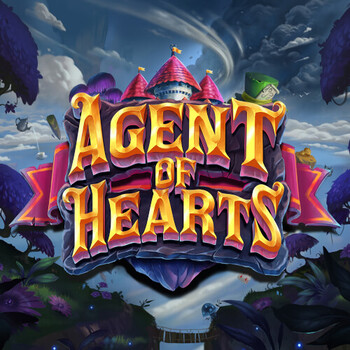 Produced by
Play N Go
Play'n Go is inviting players on another exciting trip into the world of wonderland. Agents of Hearts slot is based on Lewis Carroll's famous tale. The gameplay includes a unique theme, cluster pays symbols and 4 Agent features.

RTP rate stands at 96.25% which is considered to be slightly over the average. The variance is very high with volatility rated 8 out of 10. The maximum win stands at 5262x the initial stake.

If you create a winning cluster, this feature is activated. Winning symbols are blasted from the reels and new symbols drop into the spaces. A new winning is calculated and rewarded. The process continues as winning lines form.

The Queen’s Heart Free Spin Feature is triggered by collecting 3 or more key symbols in a single spin. A single free spin is awarded and during the bonus round, the Four Agents show their power.

How to Play Agent of Hearts Slot Online

First, select the stake size from the bottom bar and click on the spin button. Also, you can choose the auto-spin feature which spins the reels a specified number of times. A stop value can also be set.

What is the maximum bet for Agent of Hearts?

The maximum bet is 0.20 coins for a single spin.

What is the minimum bet for Agent of Hearts?

The minimum bet is 100 coins for a single spin.

Can I play Agent of Hearts on mobile?

Agent of Hearts is available for both mobile and PC gamers.

What is the RTP of Agent of Hearts?

RTP rate is 96.25% which is slightly above the average.

What is the biggest potential win for Agent of Hearts?

The maximum win from a single spin is 5262x the stake.

Play'n Go has been on the gaming radar since 1997 and has released more than 50 unique games in different languages. Most of their games are playable on several devices including PCs, tablets and mobile devices.

Some of the best slot games from the developer include Diamond Vortex, Riddle Reels, Rally 4 Riches, Agent of destiny among other games. These slots have an average RTP of 96% along with different bonus features.

Genting offers more than 400 games from different game developers worldwide. These games include slots, table games, video poker and live casino games. They offer both online and land-based casinos in the UK and other countries.