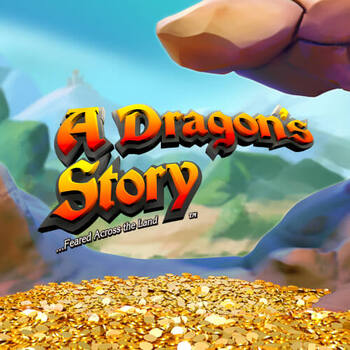 We’ve heard of brave men who have battled great dragons and achieved victory. With A Dragon’s Story, the focus is shifted from the glorified hero to the watchful dragon who just wanted to protect his treasures from the man who wants to take them.

Set in a 5x3 grid with 25 paylines, this game’s main character is Ruff the Dragon whose goal is to keep Sir William out of his prized possessions. With an overall average payback of 95.224% and a volatility level set in medium, your goal is to help keep the knight from entering the dragon’s lair, and Ruff will compensate you for your services.

Low-paying symbols are represented by 9, 10, J, Q, and K card royal symbols, while the high-paying symbols are represented by Sir William himself running away, and golden treasures. Ruff The Dragon serves as the game’s Wild, a symbol that can substitute for any other symbol on the reels, except for the Scatter symbol. The Scatter is represented by an orb-like jewel that -when triggered, turns into a dragon’s eye. There are also little dragons that can burn symbols into Wilds at any time, so keep on the lookout!

There are many features that can keep the game exciting and the stakes even higher: Superbet is an additional wager you can choose to turn on which invites these little dragons into your game. Landing 3 or more Scatters triggers 10 Free Games, where the little dragons become more active and all prizes are doubled. You can be awarded the Brave Sir William Bonus after any paid spin where you choose a Fireball and win from 50x-1250x your bet.

A Dragon’s Story can be played on any of your mobile devices with Genting Casino. Set your budget, and help keep Ruff’s treasures safe. Try the game and win the prizes, but remember to spin while it’s fun, not futile!