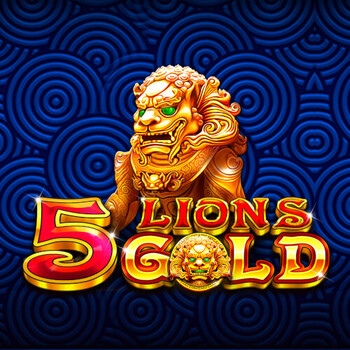 Pragmatic Play continues with their line up of Oriental inspired slot games with 5 Lions Gold. This game does feature other creatures more than just the lion which actually features a whole of different symbols in its gameplay. Because in 5 Lions Gold, you will encounter the low value symbols like A, K, Q, J, 10, and 9. Higher symbols meanwhile are the turtle, fish, toad, phoenix, and dragon.

Of course the most important symbol for this game is the lion which is made up of gold and acts as the wild symbol.The Yin yang is the scatter symbol which only appears in reels 2,3 & 4 and will trigger the Free Spins Feature.

There is also a feature called Golden Reels Jackpot where the player can win the value at the top of the board which has 3 types: minor, major, and grand. The jackpots can be activated in two ways, one way is when a random reel turns to gold, up to a maximum of 5 reels. 3, 4 or 5 golden reels trigger the minor, major or grand jackpot respectively.

The interface is made up of the large  game grid taking almost all of the screen. This also affects the other buttons like the spin and betting buttons hovering over the game area. However this set would be helpful for those who have poor eyesight  to better determine the symbols which individually are distinguishable because of their color and design.

5 Lions Gold might be compared to other oriental style slots, yet it does offer the best of classic games with new features also found in modern slot games. With good features, it can attract causal and power players.