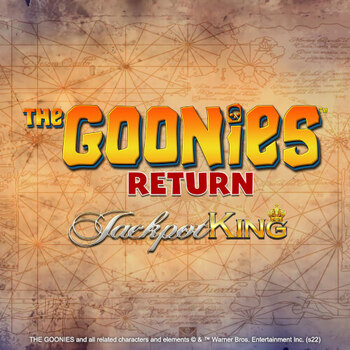 Step into the shoes of The Goonies with this online slot game developed by Blueprint Gaming. The Goonies is a 5-reel and 20-line slot game based on the cult movie with the same name. The Goonies' RTP is at 93.06% plus JPK. The minimum to maximum bet ranges from 0.10 to 500. The maximum win is 10,000x your total stake. The Goonies has a nostalgic audio and visual that is playable on both mobile and desktop.

Two modifiers can be triggered after any spin that can turn a lose into a possible win. A scythe will appear on a losing spin which resets the reels into a possible win. A cave collapse can also occur to reveal a win. The bonus round activates if a player achieves 3 or more bonus symbols in the view. The game bonus will be revealed once the player spins the wheel and stops on one of the 6 features. The possible bonuses are the Fratelli Hideout Bonus, Skeleton Organ Bonus, Super Sloth Free Spins, Goonies Go Wild Free Spins, Inferno Free Spins, and One-Eyed Willy's Treasure Bonus. There are also other exciting game features such as the Jackpot King Deluxe System and Feature Gamble in the game. Play the Goonies today.